Low levels of phosphate can disrupt bone ossification and predispose to fractures. FGF23 is one of the major determinants of phosphate homeostasis, acting to increase urinary phosphate excretion. However, the regulation of FGF23 is incompletely understood. In this issue of the JCI, Smith et al. show that the cleaved form of αKlotho, the membrane-bound form of which is an FGF23 coreceptor, serves as a novel endocrine regulator of phosphate homeostasis, capable of inducing FGF23 production in osteocytes. 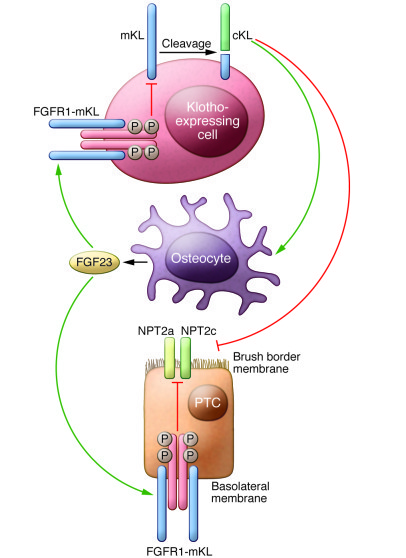 mKL, which is expressed primarily in distal renal tubules, parathyroids, and choroid plexus, can be cleaved to generate cKL. The resulting hormonal factor increases the osteocytic production of FGF23, which activates the FGFR1-mKL receptor complex in renal proximal tubular cells (PTCs), probably at the basolateral membrane. In addition, cKL directly deglycosylates NPT2a and NPT2c protein, making it more susceptible to proteases, thereby reducing expression of both transporters in the apical membrane. Not pictured, cKL may serve as a “portable” coreceptor of FGF23, thus enhancing FGF23 signaling in cells such as PTCs, in which mKL is less abundantly expressed.