The list of functions of long noncoding RNAs (lncRNAs) in human tissues is rapidly growing. To further underscore their critical role in human health, two reports in this issue of JCI associate altered expression of novel lncRNAs with the heritable syndromes HELLP and brachydactyly type E. 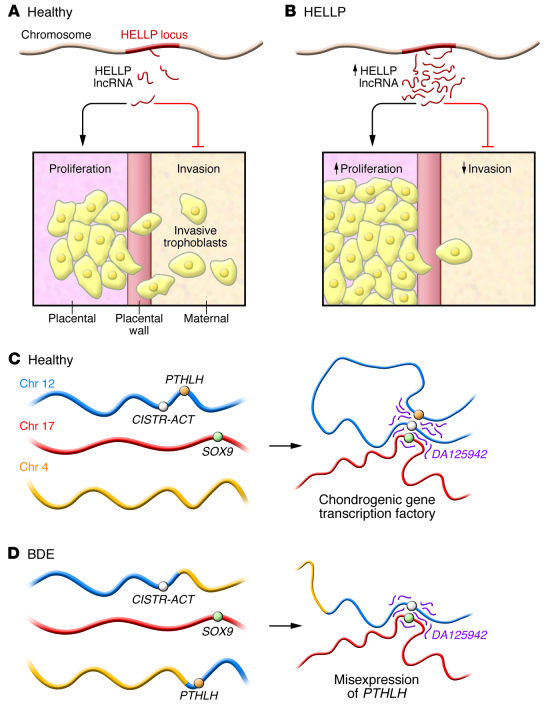 () Placental trophoblasts normally invade the uterine wall as the placenta remodels the maternal vasculature. van Dijk et al. propose that a lncRNA transcribed from the HELLP locus regulates the transition from proliferation to invasion of trophoblasts (). () Mutations predisposing to HELLP that are present in fetal tissue appear to promote increased expression of the HELLP lncRNA (pink) in placental trophoblasts, promoting trophoblast proliferation at the expense of differentiation and invasion. () The locus (purple) and , a lncRNA transcribed from the locus, interact in with and in with . Maass et al. conclude that organizes chromatin to coordinate transcription of multiple loci involved in cartilage differentiation (). () A chromosomal translocation found in BDE patients disrupts the ability of to bind the locus in , potentially causing premature chondrocyte differentiation at the expense of proliferation and bone elongation.