Tipping the scales early: probing the long-term effects of obesity

Tipping the scales early: probing the long-term effects of obesity

Obesity has reached epidemic proportions in the United States, and obesity-related illnesses have become a leading preventable cause of death. Childhood obesity is also growing in frequency, and the impact of a lifetime spent in the overweight state is only beginning to emerge in the literature. In this issue of the JCI, Bumaschny et al. used a genetic mouse model to investigate the self-perpetuating nature of obesity and shed some light on why it can become increasingly difficult to lose weight over time.

deletion in the hypothalamus leads to obesity in ad libitum fed mice. 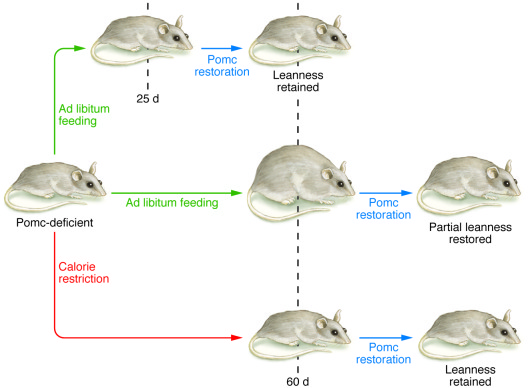 Bumaschny and colleagues demonstrated that the restoration of hypothalamic expression could normalize body weight in young mice, but this is progressively attenuated as obesity was allowed to continue and the age of restoration was delayed. When -deficient mice were aged on a calorie-restricted diet, later reexpression prevented the subsequent development of obesity, suggesting that the preceding development of obesity, but not age itself, is responsible for the attenuated phenotypic responses to rescue in older -deficient mice.