HIV infection leads to progressive destruction of infected CD4 T cells, hypergammaglobulinemia, and loss of memory B cells. Germinal centers, which are key to memory B cell formation and protective antibody responses, are major HIV reservoirs in which the virus replicates within T follicular helper (TFH) cells. In this issue of the JCI, the Koup and Streeck groups report that chronic SIV/HIV infection promotes TFH cell accumulation, which may drive B cell dysregulation. Their discoveries suggest that HIV harnesses TFH cells to evade the antibody response. 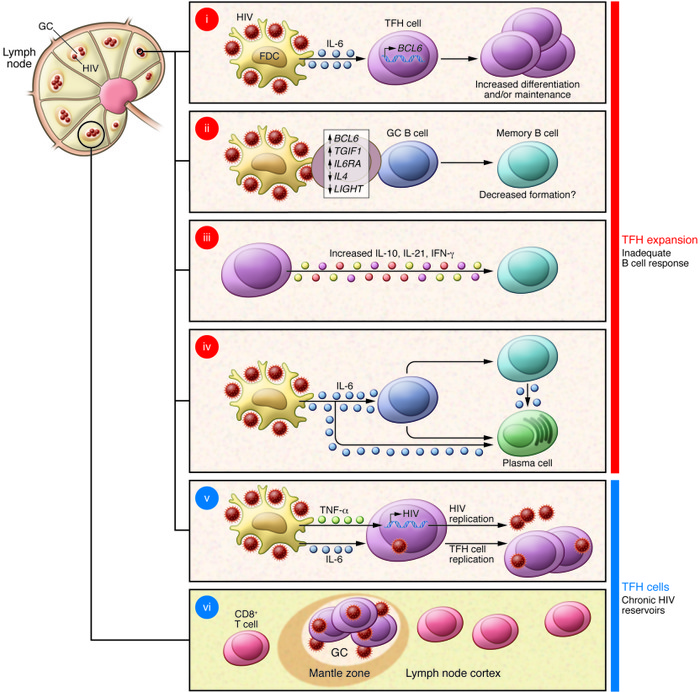 (i) Excessive IL-6 produced by FDCs that harbor HIV viruses leads to upregulation of BCL-6 and increased differentiation and/or maintenance of TFH cells. Increased TFH cell numbers, together with abundant antigen, lowers competition for B cell selection reducing affinity maturation. (ii) Chronic virus infection changes the TFH cell expression of key molecules, including , , , , and , leading to altered function that may contribute to decreased memory B cell formation. (iii) In HIV-infected individuals, a larger fraction of TFH cells secrete IL-21 and possibly other cytokines known to promote B cell differentiation and antibody production; this can contribute to the hypergammaglobulinemia. (iv) The high IL-6 levels found in HIV infection may directly promote plasmacytosis and even enhance differentiation of memory B cells into plasma cells, leading to hypergammaglobulinemia and loss of memory B cells. (v) HIV replicates in TFH cells, and this may be enhanced by FDC-derived cytokines, including TNF. Exposure to high levels of IL-6 might also explain the increased proliferative rate of TFH cells in infected individuals, which may help maintain the viral reservoirs. (vi) It has been suggested that infection of TFH cells may be a strategy for viral persistence, since germinal centers are relatively devoid of cytolytic CD8+ T cells. GC, germinal center.