Although endoplasmic reticulum (ER) stress is a pathologic mechanism in a variety of chronic diseases, it is unclear what role it plays in chronic hypertension (HTN). Dysregulation of brain mechanisms controlling arterial pressure is strongly implicated in HTN, particularly in models involving angiotensin II (Ang II). We tested the hypothesis that ER stress in the brain is causally linked to Ang II–dependent HTN. Chronic systemic infusion of low-dose Ang II in C57BL/6 mice induced slowly developing HTN, which was abolished by co-infusion of the ER stress inhibitor tauroursodeoxycholic acid (TUDCA) into the lateral cerebroventricle. Investigations of the brain regions involved revealed robust increases in ER stress biomarkers and profound ER morphological abnormalities in the circumventricular subfornical organ (SFO), a region outside the blood-brain barrier and replete with Ang II receptors. Ang II–induced HTN could be prevented in this model by selective genetic supplementation of the ER chaperone 78-kDa glucose-regulated protein (GRP78) in the SFO. These data demonstrate that Ang II–dependent HTN is mediated by ER stress in the brain, particularly the SFO. To our knowledge, this is the first report that ER stress, notably brain ER stress, plays a key role in chronic HTN. Taken together, these findings may have broad implications for the pathophysiology of this disease. 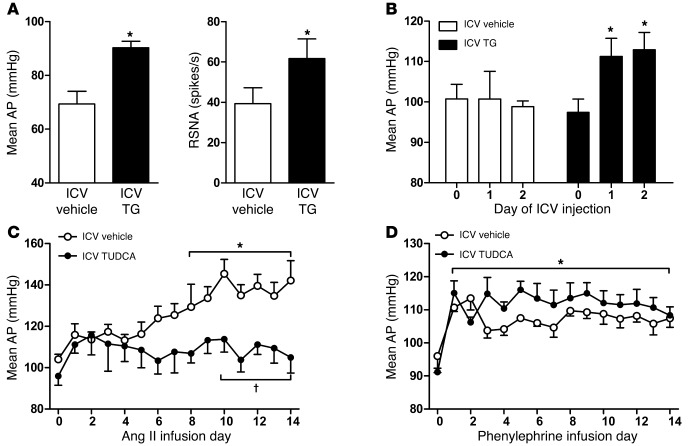 The chemical ER stress inducer TG or vehicle was injected via an ICV cannula in male C57BL/6 mice. () Mean AP and RSNA in anesthetized mice 24 hours after brain injections ( = 7–8). () Mean AP in conscious mice over 2 days of brain TG or vehicle injections ( = 4–5); * < 0.05 versus ICV vehicle or day 0. In separate experiments, chronic HTN was induced over 2 weeks with systemic infusion of Ang II (600 ng/kg/min) or phenylephrine (30 μg/kg/min) in conjunction with brain infusion of the ER stress inhibitor TUDCA or vehicle via an ICV cannula. AP recorded by radiotelemetry in conscious mice during () Ang II or () phenylephrine infusion in combination with brain delivery of TUDCA or vehicle ( = 3–5). * < 0.05 versus day 0; † < 0.05 versus ICV vehicle.