NK cells are a component of the innate immune system identified in animals as serving an essential role in antiviral immunity. Establishing their role in human health has been challenging, with the most direct insight coming from the study of NK cell–deficient individuals. However, NK cell deficiencies are rare, and more research is needed. In this issue of the JCI, two independent groups of researchers have simultaneously identified the genetic cause of a human NK cell deficiency as mutation in the MCM4 gene, encoding minichromosome maintenance complex component 4. These reports suggest a critical role for the minichromosome maintenance helicase complex in NK cells and NK cell–mediated host defense. 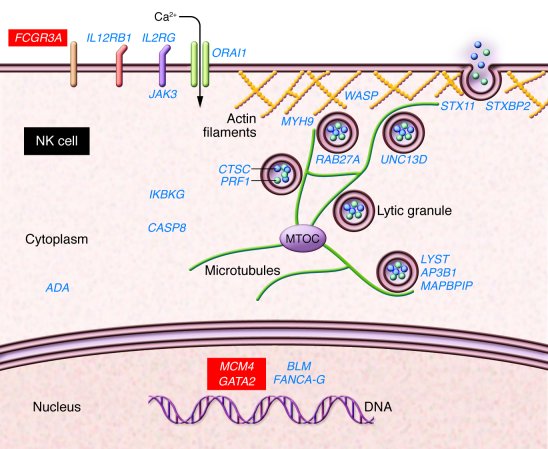 A human NK cell is represented schematically, with disease-associated genes listed in proximity to where the encoded proteins function within the cell. Genes that have an impact on other immune cells in addition to NK cells and thus cause broader immunodeficiency/hematological syndromes are shown in blue. The three genes known to cause either functional () or classical ( and now ) NK cell deficiency are shown in red. mutation impacts a region of the well-defined NK cell activation receptor (shown on the cell surface) encoded by the gene (), while mutation affects the broadly expressed hematopoietic transcription factor (shown in the nucleus) that it encodes (, ). mutations as defined by Gineau et al. () and Hughes et al. () presumably affect the function in NK cell DNA replication of the MCM2–7 complex of which MCM4 is a component. The impact and role in NK cells of the other human disease-associated mutated genes is reviewed elsewhere (, , ). In addition to having an impact on other immune cells, these affect NK cell development (, ), NK cell survival (, , ), NK cell lytic function (, , , , , , , , , , , , ), or NK cell responsiveness (, , , , ).