Thermogenesis in brown adipose tissue (BAT) is well characterized as being under the control of the sympathetic nervous system. The energy-burning capacity of BAT makes it an attractive target for anti-obesity therapies. However, previous attempts to manipulate BAT’s sympathetic activation have lacked specificity. In this issue of the JCI, Bordicchia et al. provide new data indicating that cardiac natriuretic peptides (NPs) are also able to activate thermogenic machinery in adipose tissue. Their findings suggest a novel strategy to increase energy dissipation in adipose tissue, independent of adrenergic receptors.

Hypothesized role of NPs as chronic regulators of BAT. 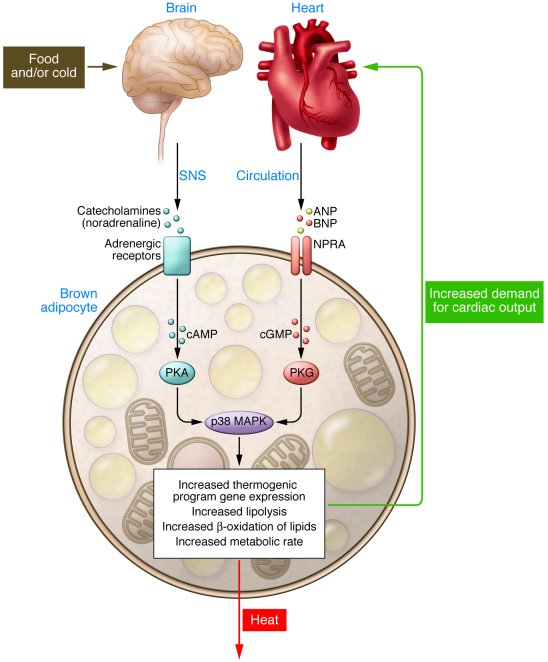 Alterations in cardiac demand due to increased metabolic rate in a cold environment result in increased NP levels. NP signals via PKG to increase p38 MAPK and thus induce thermogenic machinery. As this bypasses the membrane adrenergic receptors and PKA, modulation of acute activity by the SNS is still possible but operates in the context of any chronic changes to basal thermogenic activity and capacity. A comparison could be made with a stereo system, where the volume dial is the adrenergic axis and the speaker size relates to the amount of p38 activation by other molecules such as NP. If the size of the speakers is increased tenfold, the stereo has a much higher maximum volume, but it is not necessary to turn the volume dial 10 more times to reach it.