Cardiac ischemia-reperfusion (I-R) injury occurs upon prompt restoration of blood flow to the ischemic myocardium after an acute myocardial infarction. Interestingly, many of the features of I-R injury are related to impaired mitochondrial signaling and mitochondrial dysfunction. Restoring cardiac energy bioavailability and reduction-oxidation (redox) signaling are therefore important in recovery after I-R injury. In this issue of the JCI, Yoshioka and colleagues describe an important and unexpected role for thioredoxin-interacting protein (TXNIP) in the control of mitochondrial respiration and cell energy metabolism. Their findings could open the door for development of TXNIP-targeted therapeutic approaches for the treatment of cardiac I-R injury. 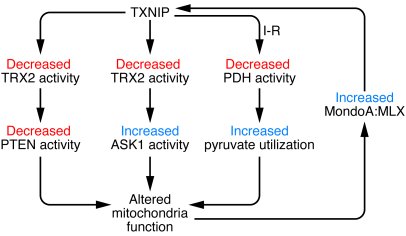 First, TXNIP regulates fuel use in the mitochondria via inhibition of TRX2 and alteration of PTEN-Akt signaling. Second, TXNIP translocates to the mitochondria in response to changes in cellular redox state, resulting in inhibition of TRX2 and subsequent activation of ASK1 that leads to opening of the mitochondrial permeability transition pore. Third, as shown by Yoshioka et al., TXNIP interacts with PDH and acts as a metabolic switch between aerobic and anaerobic metabolism (). Last, TXNIP expression is closely regulated by the MondoA:MLX transcription factor, which is activated by glucose uptake, glycolytic intermediates generated by the mitochondria, and lactate.