Preserving postischemic reperfusion in the kidney: a role for extracellular adenosine

Preserving postischemic reperfusion in the kidney: a role for extracellular adenosine

Several adenosine receptor subtypes on endothelial, epithelial, mesangial, and inflammatory cells have been implicated in ischemic acute kidney injury, a life-threatening condition that frequently complicates the care of hospitalized patients. In this issue of the JCI, Grenz and coworkers provide novel insight into how preservation of postischemic renal perfusion by endothelial cell adenosine A2B receptors is antagonized by adenosine reuptake into proximal tubule cells by equilibrative nucleotide transporter 1, which can be inhibited by dipyridamole. The work suggests that adenosine A2B receptor agonists and inhibition of equilibrative nucleoside transporters by dipyridamole may have therapeutic potential in ischemic acute kidney injury, a condition for which there are currently no specific therapeutic interventions.

Sites of interacting processes in Adora2b-mediated protection against AKI. 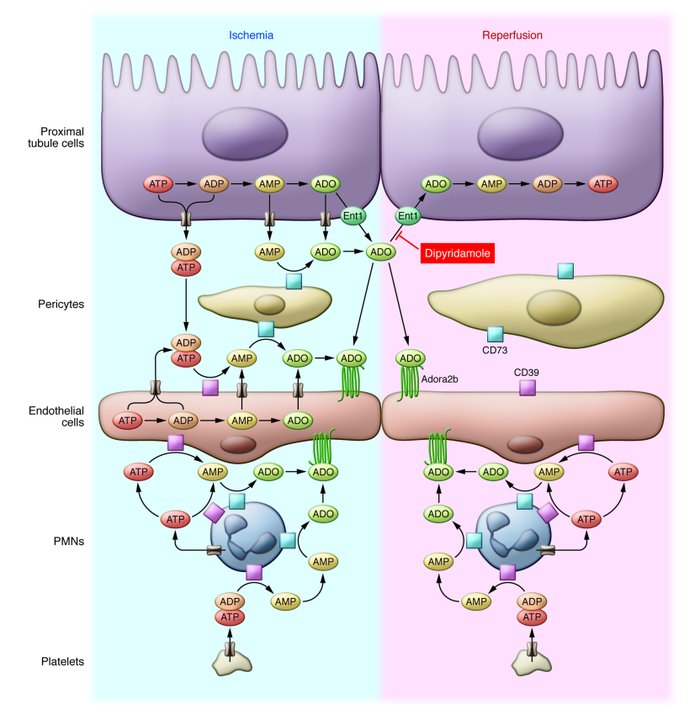 During ischemia, adenine nucleotides and adenosine can theoretically be released from tubule cells, endothelial cells, leukocytes, or platelets. Released ATP and ADP can be converted to AMP by CD39 on either endothelial cells or leukocytes (polymorphonuclear leukocytes [PMNs]). The released AMP can be further metabolized to adenosine by CD73, which in the kidney is most highly expressed on pericytes. CD73 is also expressed on leukocytes. In this issue of the , Grenz et al. clearly show using mutant mice that activation by adenosine of Adora2b localized to the endothelium can preserve peritubular capillary blood flow that protects the tissue during reperfusion (). Normally, despite the multiple potential extravascular and intravascular sites of adenosine generation, endothelial Adora2b activation is largely prevented by adenosine reuptake into proximal tubule cells by Ent1. Dipyridamole blocks Ent1-mediated adenosine reuptake and enables protective Adora2b activation. The large mass of proximal tubule cells as a source of released nucleotides and adenosine, the positioning of CD73 on pericytes to generate adenosine from nucleotides released by the tubules, and the sensitivity of adenosine availability to tubule cell Ent1 suggest that tubular cell adenosine generation is more important than intravascular for Adora2b activation. ADO, adenosine.