Radiation gastrointestinal (GI) syndrome is a major lethal toxicity that may occur after a radiation/nuclear incident. Currently, there are no prophylactic countermeasures against radiation GI syndrome lethality for first responders, military personnel, or remediation workers entering a contaminated area. The pathophysiology of this syndrome requires depletion of stem cell clonogens (SCCs) within the crypts of Lieberkühn, which are a subset of cells necessary for postinjury regeneration of gut epithelium. Recent evidence indicates that SCC depletion is not exclusively a result of DNA damage but is critically coupled to ceramide-induced endothelial cell apoptosis within the mucosal microvascular network. Here we show that ceramide generated on the surface of endothelium coalesces to form ceramide-rich platforms that transmit an apoptotic signal. Moreover, we report the generation of 2A2, an anti-ceramide monoclonal antibody that binds to ceramide to prevent platform formation on the surface of irradiated endothelial cells of the murine GI tract. Consequently, we found that 2A2 protected against endothelial apoptosis in the small intestinal lamina propria and facilitated recovery of crypt SCCs, preventing the death of mice from radiation GI syndrome after high radiation doses. As such, we suggest that 2A2 represents a prototype of a new class of anti-ceramide therapeutics and an effective countermeasure against radiation GI syndrome mortality. 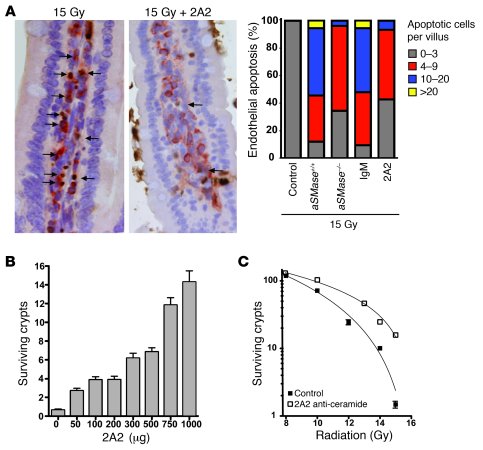 () Purified 2A2 or irrelevant IgM control (1,000 μg) was injected intravenously into C57BL/6 mice 15 minutes prior to 15 Gy WBI, and proximal jejunum was harvested 4 hours thereafter. Endothelial apoptosis was identified by microscopic detection of TUNEL (brown) and CD34 (red) double-positive endothelium (indicated by arrows; original magnification, ×400). Data, compiled from 3 experiments using 3 mice each analyzing 200 intact villi per mouse, are presented as a histogram. Note that approximately half of the villi in wild-type mice display 10 or more apoptotic endothelial cells after irradiation, effectively abrogated by preventing CRP formation genetically (using mice) or pharmacologically (2A2 prophylaxis). () 2A2 dose dependently protects small intestinal crypts. C57BL/6 mice were administered purified 2A2 (0–1,000 μg) 15 minutes prior to 15 Gy WBI. () Administration of 2A2 (1,000 μg) 15 minutes prior to 8 to 15 Gy WBI enhances crypt survival, quantified by the microcolony assay of Withers and Elkind. ( and ) Data (mean ± SEM) are compiled from 3 experiments of 2 mice each, analyzing 10–20 intestinal circumferences per mouse.