Oculocutaneous albinism (OCA) is a group of genetic disorders characterized by hypopigmentation of the skin, hair, and eyes. Affected individuals experience reduced visual acuity and substantially increased skin cancer risk. There are four major types of OCA (OCA1–OCA4) that result from disruption in production of melanin from tyrosine. Current treatment options for individuals with OCA are limited to attempts to correct visual problems and counseling to promote use of sun protective measures. However, Onojafe et al., reporting in this issue of the JCI, provide hope for a new treatment approach for OCA, as they demonstrate that treating mice that model OCA-1b with nitisinone, which is FDA approved for treating hereditary tyrosinemia type 1, elevates plasma tyrosine levels, and increases eye and hair pigmentation.

Synthesis and ER-based maturation of tyrosinase. 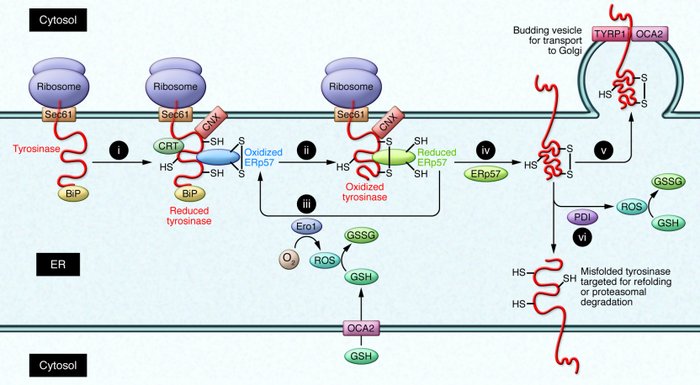 Tyrosinase is synthesized on ribosomes and translocated into the ER membrane. (i) Tyrosinase is bound by the chaperones BiP, then calnexin (CNX), followed by ERp57 (ii) and calreticulin (CRT). Each chaperone is required to facilitate tyrosinase folding and glycosylation. In order to fold the peptide, protein disulfide isomerases (PDIs) such as ERp57 catalyze the formation of disulfide bonds. (iii) ERp57 is converted to a reduced state during catalysis. In order to recycle the protein, the ER oxidoreductin Ero1 oxidizes the PDI, generating ROS in the process. These ROS are detoxified by reduced glutathione (GSH), which is transported into the ER from the cytosol through a channel. Based on our studies (), we hypothesize that the OCA2 protein serves as a GSH pump. (iv) ERp57 then catalyzes the isomerization of disulfide bonds to form a folded peptide. Correctly folded tyrosinase is released by the chaperones and then (v) recruited to a vesicle for transport to the Golgi. Recruitment may be facilitated by OCA2 and TYRP1. (vi) In the event that the protein is misfolded, disulfide bonds are removed by PDIs, which generates ROS that are removed by GSH, and tyrosinase is refolded. There are a limited number of protein refolding cycles, after which tyrosinase is transported to and degraded by proteasomes. GSSG, oxidized glutathione.