The bleeding disease: Hemophilia and the unintended consequences of medical progress

Find articles by Evatt, B. in: JCI | PubMed | Google Scholar 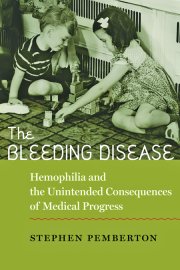 In his book The Bleeding Disease, Stephen Pemberton carefully traces the progress made by hemophilia patients to achieve normalcy via the application of technology and scientific research. Pemberton worked at the side of one of the world’s foremost hematologists and pioneer of hemophilia treatment, Kenneth Brinkhous, and was in a unique position to acquire astute insight into the condition, its effects on patients’ lives, and the history of medical progress. He began the project while a graduate student in history at University of North Carolina Chapel Hill, the site of numerous important discoveries in coagulation, but the book was not finished until recently and presents a global perspective. The author not only examines the discoveries and progress made in managing hemophilia in a modernizing society, but lays out the context for interpreting how the hemophilia population transformed the disorder into a manageable experience by living with it on their own terms. By vividly interweaving the interaction of society, patients, physicians, scientists, government entities, and industry, the author provides insight into how the successes and failures of medical advances led to normalizing patients’ lives.

Pemberton begins by pointing out that hemophilia is one of the oldest hereditary diseases on record, with earliest known references dating from second-century ad Biblical writings. Subsequent mention of hereditary bleeding disorders appear in writings during the middle ages, but during the 19th and 20th centuries, hemophilia was transformed from a medical curiosity to a manageable chronic condition, and the dramatic scientific advances of the 20th century provided a molecular understanding of the underlying mechanism of the disease.

The first chapter highlights hemophilia as conceptualized by experts between 1800 and 1940. These definitions were influenced by social and cultural assumptions about the disorder, and they evolved along with society. Especially interesting are the roles that sexism played in ideas about transmission and the attempts to control the condition when eugenics was a popular idea. The book goes on to describe the scientific discoveries between 1890 and 1930 that defined hemophilia as a blood disease. Pemberton highlights the close working relationship between patients and dedicated physician-researchers that prompted these important discoveries and set the stage for the collaboration between them that continues to this day.

In the period following World War II, rapid improvements in transfusion medicine dramatically reshaped the management of hemophilia patients. The improved outcomes modified patients’ thinking about their condition, allowing them for the first time to imagine the possibility of living a normal life. With these changes, patients and families began to coalesce into a visible, self-advocating community that further mobilized medical resources to address bleeding disorders.

Pemberton describes how hemophilia patients increasingly took advantage of the opportunity to normalize their lives by breaking from social isolation and hyperprotection. Discoveries of cryoprecipitate and clotting factor concentrates transformed care options and gave patients a passport to freedom. Increasing demand for these blood products focused American attention on the need for an adequate blood supply, drove the development and expansion of commercialized plasma products, and influenced political policies. The interdependence of patients, physicians, advocacy groups, government, and industry was further solidified.

In the 1970s, the hemophilia community focused on two issues: how blood and blood banks should be managed as national resources, and how the nation should handle the economically disadvantaged chronically ill. The National Hemophilia Foundation successfully convinced Congress that hemophilia patients deserved federal support; that funding established a national system of comprehensive care centers. Unfortunately, these laid the foundation for the coming iatrogenic catastrophe, the AIDS epidemic, that hit the hemophilia population during the 1980s.

The end of the book concisely sets forth the AIDS epidemic in hemophilia patients and its aftermath. Pemberton examines the controversies surrounding the epidemic, chronicles the efforts promoted by various groups to contain it, and discusses how the epidemic dramatically affected the historical goals of hemophilia management and the blood industry.

The author ends on a positive note, commenting on pending advancements in future hemophilia care. But he poses several important questions concerning the governance of modern medicine and its efforts to manage difficult disorders such as hemophilia in light of the paradoxical effects medical progress may have on outcomes.