The quest for the cure: The science and stories behind the next generation of medicines 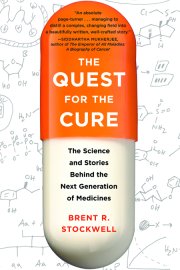 In the 1960s, Princeton astrophysicist Richard Gott applied the Copernican principle — that there is no reason to believe that we are at the center of the universe — to our place in time (1). He used this approach to predict the longevity of the USSR and of the Berlin Wall, and even the duration of human life on earth (>5,100 years), to within 95% confidence limits. Remarkably, Gott has been proven correct in two of these three cases — so far!

I wonder what Gott would make of the current state of pharmaceutical medicine? To date, FDA-approved drugs address a mere 400 or so unique molecular targets out of the roughly 20,000 genes in the human genome. Does that mean we are at the very beginning of a revolution in drug discovery, or is it, in a Copernican sort of way, more likely that we have already mined most of the “druggable” genome? Brent Stockwell grapples with this profoundly important question — the very future of pharmaceutical drug development — in his book The Quest for the Cure.

Stockwell, of Columbia University and the Howard Hughes Medical Institute, is a pioneer in the field of chemical biology, in which chemical probes are used to interrogate biological systems for mechanistic understanding as well as drug discovery and development. The book is richly referenced and, though intended for the lay audience, should also be of strong interest to biomedical researchers and clinicians. Stockwell uses clear and direct prose to trace the history and science of current pharmaceutical strategies, and to lay out key scientific challenges ahead for expanding pharmaceutical development beyond the tiny corner of the human genome that has been addressed to date. Along the way, Stockwell provides colorful stories about the scientists and discoveries that revolutionized essential aspects of current-day drug development, reminding us of the inextricable role of personality in driving scientific discovery.

Stockwell focuses most of the book on the key question of what fraction of the human genome could theoretically be targeted by new drugs. He notes that despite constraints on the size and chemistry of small molecules to be effective pharmaceutical drugs, 1060 molecular permutations are still possible, much too large of a space to search through physically even using today’s high-throughput screening methods. On the other hand, Stockwell discusses the fascinating notion of the “privileged scaffold,” that certain core chemical structures (e.g., the benzodiazepines) are intrinsically more likely to be effective ligands at a range of otherwise unrelated biological targets.

But can we find these privileged scaffolds in a systematic way? Stockwell describes the early years of pharmaceutical development, with chemists generating molecules that they intuited might have biological activity. Searching for indications was only done subsequently, with a mechanistic understanding following far later — if ever. In recent years, pharmaceutical development has become dominated by biologists, with the idea that understanding molecular mechanisms of disease will allow the tailoring of drugs against specific, predefined molecular targets. Stockwell observes, though, that while there have been some success stories from this approach (e.g., Gleevec), chance matching of drug with indication is still common (e.g., Viagra), and that a number of molecular targets thought to be key have come to be considered intrinsically undruggable in the lab and clinic.

However, with this book Stockwell makes a compelling case that druggability is only an “operational definition,” that with the development of new technologies most of the human genome could eventually be addressed. The final chapters of the book take a peek into such new drug approaches, especially biologics that co-opt nature’s own strategies, including RNA interference and modulation of protein-protein interactions, long unaddressable using typical small molecules.

The book does an exceptional job of maintaining the excitement of its lively title, providing just enough scientific detail and exposition without impeding the flow of its strong central narrative. Nevertheless, I would have welcomed a bit more discussion about the question of what fraction of potential molecular targets in the body are intrinsically disease-modifying. It is possible that a large number of molecular targets — if not the majority — reside in complex signaling networks with strong built-in redundancy and compensatory mechanisms. Indeed, a promise of large-scale systems biology approaches is to understand which molecular targets form key nodes for the progression of biological processes (“privileged targets”?), against which pharmaceutical drugs will prove to be the most effective.

Reports appear almost daily in the media on the declining rate of new drug development despite record levels of investment in R&D and on the marginal benefit of new drug therapies costing upwards of $100,000 per year. Against this sobering backdrop, Quest for the Cure provides an engaging and rewarding read on the “majestic search” for “the majority of possible cures,” providing hope that smart science can ultimately continue to provide new paths for better health and health care in the coming years.