Parkinson disease (PD) is a relatively common neurodegenerative disorder characterized by the progressive degeneration of dopaminergic neurons in the substantia nigra. About 5%–10% of PD cases are inherited. Mutations in the Parkin gene, which encodes a protein that can function as an E3 ubiquitin ligase, are a common cause of familial PD. Such mutations act in a loss-of-function manner and impair the ability of the encoded protein to mediate substrate ubiquitination, although the subsequent molecular pathway that precipitates neuronal degeneration is poorly defined. In this issue of the JCI, Kim and colleagues describe painstaking evidence using a number of dissecting approaches in intact animals and cultured cells to functionally link Parkin and the class B scavenger receptor CD36, suggesting a novel and complex connection between PD and fatty acid metabolism. 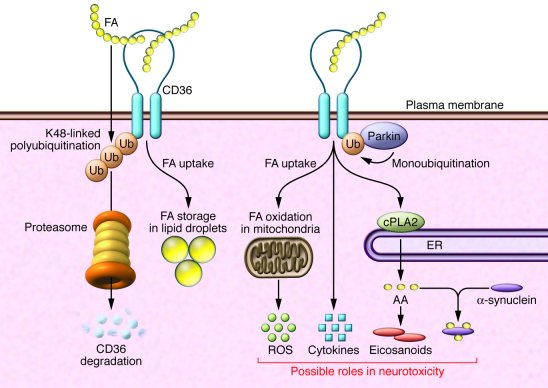 Parkin monoubiquitinates CD36, stabilizing it and increasing its level at the plasma membrane. This is in contrast to long-chain FAs, which induce CD36 polyubiquitination and target CD36 for proteosomal degradation. At the plasma membrane, CD36 facilitates uptake of FAs, which are stored into lipid droplets or oxidized by mitochondria. Under conditions of cellular stress, CD36 is involved in Ca2+- and ERK1/2-mediated activation of cPLA2 to release arachidonic acid (AA) from endoplasmic reticulum and nuclear membrane phospholipids. Brain AA is involved in the regulation of synaptic transmission and is also converted by microglia to bioactive eicosanoids, which can have pleiotropic effects on inflammation. Excess production of AA-derived metabolites, ROS (from mitochondria), and cytokines (CD36 signaling contributes to cytokine production) by the activated microglia can lead to neurotoxicity. Binding of AA by α-synuclein could modulate its effects and its metabolic conversion to eicosanoids.