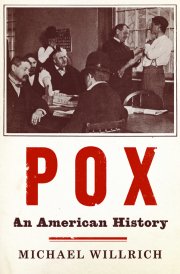 In Pox: An American History, Michael Willrich, a historian at Brandeis University, describes the disruptive role that smallpox played across the landscape of the United States at the turn of the 20th century. A gritty and engaging account of the conditions under which Americans lived at that time, the book details the ravages of smallpox during the successive epidemics of 1898–1904. Willrich provides an accessible and accurate review of the virus and the disease as well as their effect on this country. It is a powerful story about the conflicts between the role of the state in enforcing public health law and individual liberties, between science and religion, and between the privileged and impoverished classes. In particular, Willrich highlights the struggle between institutional power and individual liberty in the dispute over the role of the state in enforcing smallpox vaccination. In reading about the events that took place more than a century ago, we see many similarities to discussions today about vaccines and the role of the state in public health. Willrich’s work suggests that one might understand better the current discourse about the role of public health and science in general in American life today from an examination of the events of 1898–1904.

Those who resisted compulsory vaccination at the turn of the last century were motivated by multiple factors. As Willrich notes, for one segment of the anti-vaccinationist movement, the motivation was political. “Active opposition to ‘state medicine’ . . . was part of a larger struggle against the dramatic extension of governmental power into the realms of education, family life, personal belief, bodily autonomy, and speech,” writes Willrich, reflecting a political philosophy with features of libertarianism, radical individualism, and populism. The belief in a right to be left alone placed individual rights above social interests and was grounded in the agrarian world of Jefferson. Some anti-vaccinationists also believed in a citizen’s right to participate in scientific discourse and medical decision making, but felt excluded by state and federal authorities. Some practices are shared by those of modern anti-vaccinationists; they exaggerated descriptions of the dangers of the smallpox vaccine, promoted reliance on the natural healing properties of the human body and of healthy living, and prioritized personal liberty over the needs of “the commons” (1).

Despite what appears to be a multitude of similarities between the arguments of anti-vaccinationists then and now, Willrich argues that the discussion a century ago “was in important respects markedly different from the current debate.” He contrasts the militaristic campaigns of the US government against those that refused to be vaccinated with one admittedly crude vaccine during the 1898–1904 smallpox epidemics with the “peacetime struggle” of today’s government on multiple vaccine fronts and a different kind of discussion today about a complex administrative and welfare state.

However, I see the discussions then and now as more similar. They both reflect a peculiar American sensibility and national characteristic. While the more organized anti-vaccinationists of 1898-1904 shared terminology and beliefs with other anti-vaccine movements elsewhere in the world, the belief system underlying the anti-vaccine movement has been more pervasive, persistent, and potent in America than it has been elsewhere. Furthermore, the same belief system is responsible for the unusually broad, deeply held skepticism in this country today about climate change, genetic engineering, and evolution. This anti-science streak has been and still is an American phenomenon. Why has the belief system of the 18th century agrarian world persisted and repeatedly blossomed in the US, even during recent years, despite the scientific revolutions of the past century? A recent study provides some insight.

In 2006, Miller et al. published data that revealed a surprising and growing degree of skepticism over the previous 20 years among the US public about the role of evolution in explaining the origins of humans (2). By 2006, only 40% of those surveyed accepted the concept of evolution and only 14% felt that it was definitely true. Miller et al. described a different situation in Europe and Japan, where citizens indicated greater acceptance of evolution. Further analysis suggested that American religious fundamentalism, politicization of science, and scientific literacy were the most important factors in explaining this disparity. However, I think there is more to it. Some of the additional factors are illustrated in this book, although Willrich portrays them as somewhat unique to the US of 1900: the frontier mentality, the importance of personal experience as a source of truth, a fear of crowded urban-industrial environments, antipathy toward monopoly, and an insensitivity to the needs of a progressive society and to an impending “tragedy of the commons” (1). These factors are still important.

Willrich helps us understand our past and, in particular, the roots of current unease with mainstream science. Strong currents of classical liberalism and individualism still prevail in America. These have shaped the way science has been viewed and perhaps the ways in which it has been practiced. More than just a story of a century ago, Pox: An American History is a reminder of who we are today.