The tell-tale brain: A neuroscientist’s quest for what makes us human 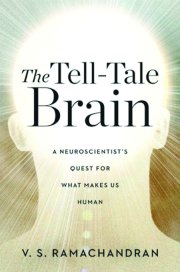 The Tell-Tale Brain by V.S. Ramachandran delivers a thought-provoking exploration of the neural basis of human cognition. Ramachandran, a prominent cognitive neuroscientist and practicing neurologist at UCSD, is well known for his studies on phantom limb, in which sensations seem to arrive from amputated body parts, and synesthesia, in which sounds may seem to have tastes, letters may have colors, or there may be some other combinations of actual and illusory events. These and other neurological oddities serve as a jumping off point for the book’s examination of the human brain, how it evolved, and what mechanisms might differentiate us from “lower” animals.

Writing for a general audience as well as neuroscience specialists, Ramachandran attempts to go beyond what is known and speculate about what might be. He argues, “If every scientist were a brush-clearing, never-stray-beyond-established-fact type, science would advance at a snail’s pace and would have a hard time unpainting itself out of corners.” In an era in which shrinking availability of research funding induces greater and greater conservatism, Ramachandran’s open-minded approach provides a refreshing contrast. This book expands the realm of ideas and topics that seem tractable to scientific exploration. That this may be accompanied by some overreaching comes with the territory; indeed, in a work of this kind, failing to overreach would be the greater error.

The book opens with the challenge of understanding what it is about our “three pound mass of jelly” that affords us our dazzling array of cognitive abilities. The accelerating pace of advancement over the last few thousand years, Ramachandran argues, requires some explanation. During this period, we have perfected cultural transmission of information, so that individuals can benefit from the hard-earned knowledge of others. What is it about our brains that allowed this to happen? Ramachandran points to two attributes of the brain as notable contributors.

The first is that neural connections don’t just go where they are supposed to. As both phantom limb syndrome and synesthesia demonstrate, some of the connections in the brain are in the “wrong” place. The limb region of the somatosensory cortex also gets a whisper of input from the face, a pathway only revealed when the limb is missing. Synesthetes experience perceptual cross-talk between real stimuli and illusory, seemingly unrelated sensations. Ramachandran suggests that such anomalous connections reveal a propensity for forging ties between content of different kinds, a propensity that would serve us well in the development of new cognitive abilities. The human brain might have a kind of anatomical flexibility that could lead, on an evolutionary and perhaps on an individual time scale, to repurposing brain areas to perform new tasks. If the connections are already there, evolution needn’t build a whole new infrastructure for some novel cognitive function from scratch.

The second major contributors to the evolution of human cognition, Ramachandran argues, are specialized neurons known as “mirror” neurons. These neurons were first discovered in the ventral premotor cortex in monkeys in 1992 by an Italian research group led by Giaocomo Rizzolatti. Mirror neurons show increased activity both when the monkey performs an action and when it watches someone else perform that same action. Ramachandran suggests that by lumping observation and performance, mirror neurons might provide us the basis for empathy, theory of mind, and the ability to predict the actions and motivations of others — vital elements of primate, and human, social structure.

The last few chapters of the book shift focus to explore the neuroscience of art — why do we like to look at what we like to look at? Here, Ramachandran proposes that what we find pleasing follows some rules, similar to the Gestalt grouping principles. Our visual systems “like” to detect objects, to see contrast, to solve “peekaboo” problems, etc. One of the most intriguing ideas in this section is that our aesthetic preferences might be driven by canonical ideals representing extreme forms of real-world stimuli. For example, in the 1940s, Dutch ethologist Niko Tinbergen found that seagull chicks pecked at stimuli resembling the red dot on their parent’s bill, but they pecked even harder at an abstract representation of the bill. Ramachandran argues that a similar tendency could explain our enjoyment of caricatures and other exaggerated artistic forms. This idea suggests a path forward for investigating the neural basis of our aesthetic preferences — currently, very much an unsolved problem — by relating aesthetics to the tuning properties of neurons in the visual pathway.

Not surprisingly, some arguments in this book have a better foundation than others (a section on autism is likely to be particularly controversial), but in the end, the most important contribution of this creative book lies not just in the particular ideas that Ramachandran offers, but in the ideas that he provokes his readers to come up with. Looking at things in a new way may lead us to unpaint a few corners, and, perhaps eventually, to clear brush in some new domains of neuroscience.