Blood work: A tale of medicine and murder in the scientific revolution 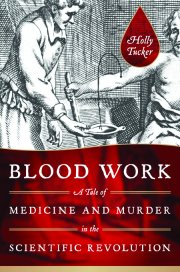 Holly Tucker, a medical historian at Vanderbilt, has written a history of the ill-fated first animal and human blood transfusions during the early phase of the scientific revolution of the late 17th century in England and France. The narrative has an intimate style that includes precise descriptions of people and events as well as reconstructions of conversations that were never documented. The main thrust of the tragic story is that transfusions were ultimately forbidden for centuries in France because of medical politics, personality clashes, and scientific and religious dogma. The final chapters recounting events in Paris from 1667 to 1668 are particularly riveting; in the end, the primary patient being treated was murdered by a physician who was opposed on religious and conceptual grounds to the very idea of blood transfusions.

The tale mainly deals with the career of the iconoclastic French physician Jean-Baptiste Denis. Denis was an outsider, from a provincial school in Montpelier rather than the Paris School of Medicine. Denis, with the support of a wealthy patron, challenged the medical establishment of Paris. Despite some initial successes, he was eventually prevented from continuing experimentation with blood transfusion in humans in France. Until the discovery of blood groups in 1901 by Landsteiner, successful transfusions were a rare event in medicine. When, more than a century after Denis’s work, the English obstetrician James Blundell employed transfusion to save a few of his hemorrhaging postpartum patients, his work did not really have a dramatic effect on the practice of medicine. For Blundell, the inability to predict which patients would have fatal hemolytic reactions was exacerbated by technical difficulties involved in direct donor to patient infusions, rendering transfusion a heroic measure rather than standard practice.

Along with the primary story of Denis and transfusion, Tucker sets the historical scene, describing the politics of Louis XIV’s court, the French Academy, and scientific competition between England and France as well as greater religious and scientific events of the period. Medical politics, the danger of pioneering clinical research, and, indirectly, the issue of medical ethics are all topics explored in this book. Finally, Tucker relates the horrific tale of how Denis’s opponents — particularly Dr. Henri-Martin de la Martinière — were prepared to murder his patient to prove their point that transfusion was anathema and dangerous.

As a physician, I might have emphasized the point that the medical theories of the time led Denis and his English competitors, such as Richard Lower, astray. They hoped that transfusion could treat psychiatric illness, believing that a patient with choleric disposition or florid insanity could be rendered calmer and more rational by the infusion of blood from a docile lamb. That theory was, as we now know, hopelessly incorrect. Indeed, prior to Blundell’s work, we have no historical records of blood transfusion being employed for its current clear-cut indications: treatment of exsanguinating hemorrhage and/or life-threatening anemia.

Denis’s opponents were members of the medical establishment who feared that transfusion from animals would turn humans into chimeras or subhuman creatures. This was as much a religious as scientific debate, and the two were largely conflated at that time. One physician argued that someone willing to fill his veins with another’s blood would possibly be prone to cannibalism as a next step. One might consider that current disagreements about stem cell therapies are similar in nature, as some find it impossible to separate considerations of religious belief and scientific approach.

In the end, transfusions were attempted for the “wrong” reasons, at least by our current standards of knowledge, imperfect as they are. Denis’ transfusions were doomed to failure both clinically and politically. The failure in France temporarily squelched research in England as well. Further, that the patient was murdered by a physician is appalling, adding to the bad karma surrounding this unhappy story.

Bleeding and purging remained a staple of medical practice for centuries despite the fact that they were mostly useless, except perhaps for phlebotomy in cases of congestive heart failure. We are confronted with a similar dilemma about transfusion in the 21st century. Most current transfusion practices developed prior to the advent of randomized trials, and they are increasingly being viewed as not all that efficacious and definitely not as beneficial to patients as we had thought (1). For example, correcting non–life-threatening anemia by red cell transfusion is sometimes a very bad idea indeed. The next decades will determine whether future physicians will view some of the first century of successful transfusion practices as misguided. Hopefully, our attempts to treat anemia with red cell transfusion in the 20th century will not be viewed as harshly as Denis and Lower’s attempts to treat insanity by blood transfusions from unsuspecting herbivores. This story does have lessons for the modern era, but they are shrouded in ambiguity and irony.