RAS signaling pathway mutations and hypertrophic cardiomyopathy: getting into and out of the thick of it

RAS signaling pathway mutations and hypertrophic cardiomyopathy: getting into and out of the thick of it

In this issue of the JCI, Wu et al. and Marin et al. describe two new mouse models of inherited disorders of the RAS/MAPK signal transduction pathway that display hypertrophic cardiomyopathy (HCM); the model from the former paper was from a gain-of-function Raf1 mutation, and the model from the latter paper was from a protein tyrosine phosphatase, non-receptor type 11 (Ptpn11) mutated allele encoding Shp2 with impaired catalytic function. The two groups show that HCM arises from increased signaling through Erk1/2 and the mTor complex 1, respectively, and that those cardiac issues can be prevented or reversed with small-molecule therapies inhibiting the appropriate pathway. Aside from being the first studies of treatment for Noonan syndrome and related disorders in a mammalian system, these papers provide important insights into the role of RAS signaling in cardiac hypertrophy and suggest the complexity in developing meaningful therapy for individuals with these RASopathies. 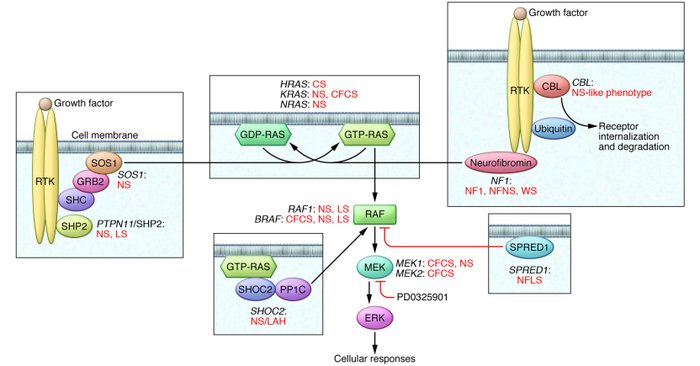 Schematic diagram showing the RAS/MAPK cascade and affected disease genes in the RASopathies. The genes for which mutations are known and their associated phenotypes are indicated near the cartoon representation of the proteins they encode. Positive regulatory interactions are indicated with black arrows, and the negative regulatory interaction is indicated with a red blunted arrow. PD0325901 is an ATP-uncompetitive inhibitor of MEK (discussed in the text) and is also indicated with a blunted red arrow. CFCS, CFC syndrome; CS, Costello syndrome; NF1, neurofibromatosis type 1; NFLS, neurofibromatosis type 1–like syndrome (also termed Legius syndrome); NFNS, neurofibromatosis-NS; NS/LAH, Noonan-like syndrome with loose anagen hair; RTK, receptor tyrosine kinase; WS, Watson syndrome.