Although a relationship between emotional state and feeding behavior is known to exist, the interactions between signaling initiated by stimuli in the gut and exteroceptively generated emotions remain incompletely understood. Here, we investigated the interaction between nutrient-induced gut-brain signaling and sad emotion induced by musical and visual cues at the behavioral and neural level in healthy nonobese subjects undergoing functional magnetic resonance imaging. Subjects received an intragastric infusion of fatty acid solution or saline during neutral or sad emotion induction and rated sensations of hunger, fullness, and mood. We found an interaction between fatty acid infusion and emotion induction both in the behavioral readouts (hunger, mood) and at the level of neural activity in multiple pre-hypothesized regions of interest. Specifically, the behavioral and neural responses to sad emotion induction were attenuated by fatty acid infusion. These findings increase our understanding of the interplay among emotions, hunger, food intake, and meal-induced sensations in health, which may have important implications for a wide range of disorders, including obesity, eating disorders, and depression. 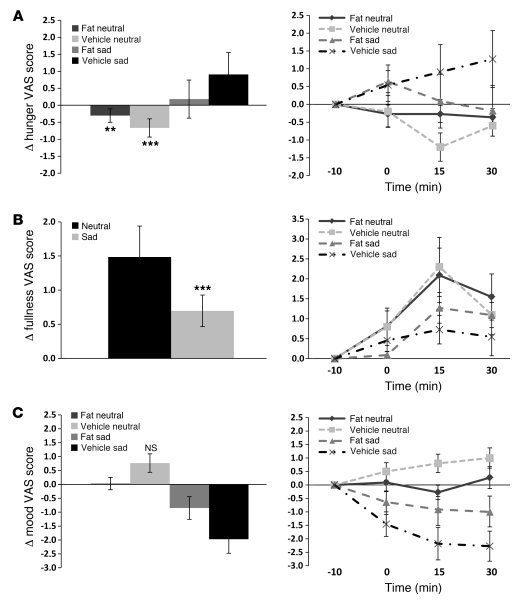