The drug development process for CNS indications is hampered by a paucity of preclinical tests that accurately predict drug efficacy in humans. Here, we show that a wide variety of CNS-active drugs induce characteristic alterations in visual stimulus–induced and/or spontaneous eye movements in mice. Active compounds included sedatives and antipsychotic, antidepressant, and antiseizure drugs as well as drugs of abuse, such as cocaine, morphine, and phencyclidine. The use of quantitative eye-movement analysis was demonstrated by comparing it with the commonly used rotarod test of motor coordination and by using eye movements to monitor pharmacokinetics, blood-brain barrier penetration, drug-receptor interactions, heavy metal toxicity, pharmacologic treatment in a model of schizophrenia, and degenerative CNS disease. We conclude that eye-movement analysis could complement existing animal tests to improve preclinical drug development.

Drug-induced OKR-like responses in the absence of a moving visual stimulus. 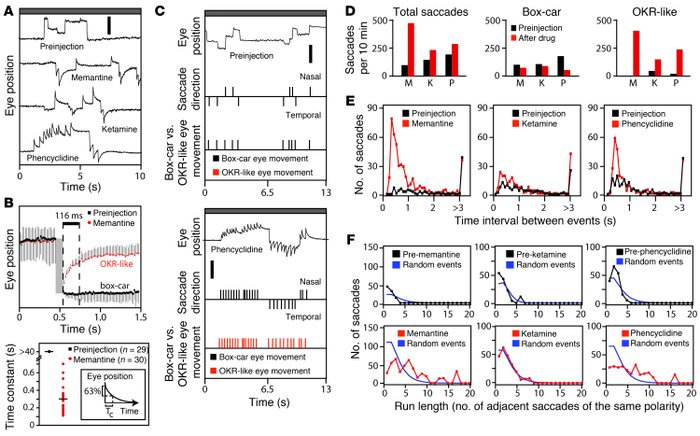 () Eye movements in the absence of a moving visual stimulus before and after an i.p. injection of ketamine (8 mg/kg), memantine (23 mg/kg), or phencyclidine (4 mg/kg). Scale bar: 0.5 mm. () Spontaneous eye movements before ( = 29) and after ( = 30) i.p. memantine, with saccade amplitudes normalized and traces temporally aligned by the saccade, and the time constant (TC) of the best-fitting exponential for each recording of eye position versus time for the 116 milliseconds immediately after the saccade. The inset shows a graphical definition of TC as the time corresponding to a 63% change in eye position, following exponential kinetics. Horizontal bars represent the mean. () Automated identification of box-car (black) versus OKR-like (red) spontaneous eye movements in 2 thirteen-second recordings, with or without i.p. phencyclidine. For each recording, the timing and polarity of the fast components were scored (central quantized trace), and then each saccade was categorized as box-car or OKR-like (bottom quantized trace). Scale bar: 1 mm. () Total (left), box-car–shaped (center), and OKR-like (right) saccades during a 10-minute recording obtained before (black) or after (red) the indicated drug. M, memantine; K, ketamine; P, phencyclidine. () Distribution of time intervals between adjacent fast components before versus after drug administration. () Clustering of saccade polarity: the number of adjacent saccades of the same polarity within a 10-minute interval before versus after drug administration. Blue lines show the calculated distribution of adjacent saccades of the same polarity for a matched number of saccades divided equally into positive and negative polarities and randomly ordered in time. For each drug, the data shown are from a single representative mouse. Data in are presented as the mean ± standard deviation.