The fever: How malaria has ruled humankind for 500,000 years 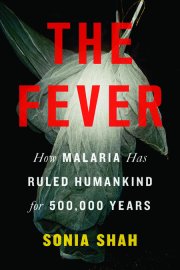 Malaria is in vogue. As investigative journalist Sonia Shah reports in The Fever: How Malaria Has Ruled Humankind for 500,000 Years, movie stars, hedge fund managers, and junior high school students are joining the fight against this dread disease. Shah, who has previously taken on big oil and big pharma, tells the story of history’s biggest killer of human beings, the malaria parasite.

When Terrie Taylor, a clinical malariologist in Malawi who is featured prominently in The Fever, told me a few years ago that Shah would visit her project, I googled Shah and discovered that her last book was an exposé of multinational drug testing in vulnerable populations, luridly titled The Body Hunters. I warned my friend to be cautious, wondering if Shah planned to write a sensationalized account of her pathogenesis research.

Happily, my fears were unfounded. Shah has written a gripping, balanced, and impressively wise account of malaria through the ages. Interspersed with reports of her own experiences with malaria-transmitting mosquitoes during childhood trips to India and more recent visits to the malaria wards of Malawi, fetid jungles of Panama, and glittering genomics laboratories of Harvard, Shah’s book provides a thorough but highly accessible account of malaria’s origins, historical impact, and current situation. If there is a theme, it is that as an organism and as a public health, social, political, and economic problem, malaria is incredibly complex. The lesson for today’s malaria fighter is that those who underestimate this complexity and attack malaria with simple, one-size-fits-all solutions will be made to look naive — if not foolish — by future investigative journalists.

This is not a technical book — those who want details of the parasite life cycle or disease symptomatology can look elsewhere. But despite the near absence of jargon, Shah conveys many key concepts of malaria biology, epidemiology, immunology, entomology, treatment, and control with clarity and accuracy and with only an occasional minor stumble (she doesn’t get the molecular basis of chloroquine resistance quite right but then neither do many malariologists). Tricky pronunciations are helpfully provided (Anopheles is rhymed with “enough of peas”), and colorful and apt analogies drive home key points. About the parasite’s convoluted shape shifting through mosquito and vertebrate hosts, Shah writes, “It’s sort of like robbing a bank while stealing a car. Things get complicated.”

Starting with the evolution of Plasmodia from its photosynthesizing ancestors, Shah integrates information from diverse sources to trace malaria’s rise to dominance over Homo sapiens. The impacts of malaria on empires, commerce, war, and human development over the eons are compellingly described and well referenced — the book ends with 50 pages of detailed citations that include interviews, scientific literature, and original sources, such as WHO reports.

Most readers will be surprised to learn the role malaria has played in American history. For example, in the 1800s, dammed water provided power for a growing manufacturing base in the northeast, and the proliferation of milldams led to recurring outbreaks of malarial fever in New York and Connecticut. Public health officials and New York Times letter writers called for destruction of milldams, but economic interests prevailed, and the Connecticut legislature passed laws limiting damages owed by offending mill owners. Equally illuminating accounts of the relationship between malaria and the slave trade and the contributions of malaria to the rise and fall of the Roman Empire are provided, all framed by a sophisticated understanding of malaria’s complex ecology.

For most of the final two-thirds of The Fever, Shah focuses on attempts to understand and master malaria, with incisive analyses of the few successes and many failures. Here, her background as an investigative journalist emerges. In example after example Shah quotes the experts extensively, allowing their own exuberantly over-confident words to set the trap that she artfully springs by telling us how things actually turned out. To any student of tropical medicine, the names would be familiar. The exploits and personalities of Patrick Manson, Ronald Ross, William Gorgas, Paul Russell, and others are vividly described, in all their visionary brilliance and petulant vanity, based on historical accounts, memoirs, and interviews with wise old-timers like Jose Najera of the WHO and the late Andrew Spielman of Harvard.

By the time we get to the part where celebrities and politicians are pouring money into the distribution of insecticide-treated nets, we know what’s coming — the bubble is going to be popped: the complex interplay between parasites, mosquitoes, and humans confounds experts once again, while underappreciated anthropological research reveals that the reasons why people do or don’t use nets are highly variable, and just as is the case with mosquito behavior and malaria epidemiology, locale-specific solutions are required. The message is discouraging but accurate and needs to be heeded by today’s malaria eradicationists, who, even if they put this book down chastened and humbled, will also be enlightened and entertained.