Henry Kaplan and the story of Hodgkin’s disease: 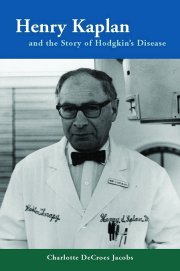 Hodgkin disease, or Hodgkin lymphoma (HL), is a rare disease that affects mainly young adults; untreated, it is rapidly fatal, but modern medicine has rendered HL curable in more than 90% of all patients. It has gained clinical and scientific visibility and serves as a model for other cancers due to successful research related to its pathological classification, effective application of new molecular-genetic techniques, development of radiotherapeutic and chemotherapeutic innovations, pioneering concepts of interdisciplinary care, and introduction of the concept of randomized clinical studies.

From the 19th century until the early 1930s, treatments for HL ranged from palliative care to surgery, arsenic, and other natural compounds. In the middle of the 20th century, radiotherapy became the predominant treatment, offering a cure for localized stages. Since the 1970s, multidrug chemotherapy has been the mainstay of treatment, providing cures even in the case of far advanced, disseminated stages.

This fascinating medical and evolutionary story is captured in a superb book by Charlotte deCroes Jacobs, titled Henry Kaplan and the Story of Hodgkin’s Disease.Jacobs’ book reads like a historical play. The curtain opens on a large stage where the players perform their roles over 170 years in different acts and varying locations starting in London and moving to Stanford. The players fight, communicate, embark on risky but trail-blazing innovations, and either become heroes or disappear behind the curtains.

The main actors are Thomas Hodgkin and Henry Seymour Kaplan, brilliantly described and meticulously investigated by Jacobs in a well-designed mixture of careful studies of historical documents, personal insight, and sensitive interviews with family members, coworkers, and faculty colleagues. Jacobs strikes an honest and objective tone, as when she notes about Henry Kaplan, “most perceived only a few facets of the hundreds that constituted the mosaic of this enigmatic man, called a ‘saint’ by some, a ‘malignant son of a bitch’ by others.”

Jacobs opens a very intimate window for her audience, revealing her personal insight into the delicate relationship and constant struggle between two men with astonishingly different personalities, Henry Kaplan and Saul Rosenberg. The two worked together for more than 20 years and were responsible for the many Stanford victories in radiotherapy, medical oncology, interdisciplinary patient care, and most importantly, the design and execution of prospective randomized clinical trials that have become the cornerstone of modern evidence-based medicine.

It is fascinating to follow Jacobs when she describes Henry Kaplan, a man intoxicated by science and driven to cure cancer, which he called his “Moby Dick.” Kaplan loved his work and touched patients with great tenderness, but could devastate coworkers and colleagues with his sharp words. According to Jacobs, “Much of his success resulted from his remarkable self-confidence, bordering on a sense of his own infallibility.” He had a great impact on the development of radiotherapy, becoming the world’s leading radiotherapist, the coinventor of the medical linear accelerator, and he was the driving force and chair of the Rye Conference, a milestone for rapid progress in the biological, pathological, and clinical understanding of Hodgkin disease.

In her book, Jacobs traces primarily the American story of Hodgkin disease, as she highlights the work of other players on stage with Henry Kaplan, including Vince DeVita, the oncologist who developed the first combination chemotherapy — the MOPP regimen — a milestone for the curative treatment of advanced stages of HL. Jacobs only briefly acknowledges the contributions of European scientists, mentioning the prominent radiotherapists Smithers, Tubiana, and Musshoff, before turning again to North America to recall the great Canadian radiotherapist Vera Peters.

Although this book is nearly a must for young clinician-scientists training in radiation or medical oncology, it lacks a comprehensive and fair perspective of the developments in the history of Hodgkin disease that were in progress outside the US, paralleling those occurring in North America. Much of this work is mentioned rarely; for instance, that of Italian physician Gianni Bonadonna, who pioneered the US gold standard of HL chemotherapy, ABVD, is relegated to a single sentence. Jacobs fails to note the large studies of the German Hodgkin Study Group (GHSG), which has been a leader in developing clinical studies in HL since 1978.

Jacobs also ignores the work to which a good deal of the molecular understanding of HL is owed: the molecular and genetic observations related to Reed-Sternberg cells and the successful cultivation of Hodgkin Reed-Sternberg cells in vitro accomplished by the Cologne group. These cell lines provided the original milestone for the international effort to define the molecular analysis of HL. They also led to the development of monoclonal antibodies against HL — antibodies Henry Kaplan wanted to produce as a “magic bullet” that would spare patients the toxicities of conventional therapies, a therapy for which Kaplan and Rosenberg worked so eagerly! In fact, this achievement was better appreciated by Henry Kaplan, who received cell lines from this author, than by his biographer. Given these limitations in its scope, this book might be more aptly titled, “Henry Kaplan and the Stanford Story of Hodgkin Disease.”