Tuberous sclerosis complex (TSC) is an autosomal dominant disorder characterized by mutations in Tsc1 or Tsc2 that lead to mammalian target of rapamycin (mTOR) hyperactivity. Patients with TSC suffer from intractable seizures resulting from cortical malformations known as tubers, but research into how these tubers form has been limited because of the lack of an animal model. To address this limitation, we used in utero electroporation to knock out Tsc1 in selected neuronal populations in mice heterozygous for a mutant Tsc1 allele that eliminates the Tsc1 gene product at a precise developmental time point. Knockout of Tsc1 in single cells led to increased mTOR activity and soma size in the affected neurons. The mice exhibited white matter heterotopic nodules and discrete cortical tuber-like lesions containing cytomegalic and multinucleated neurons with abnormal dendritic trees resembling giant cells. Cortical tubers in the mutant mice did not exhibit signs of gliosis. Furthermore, phospho-S6 immunoreactivity was not upregulated in Tsc1-null astrocytes despite a lower seizure threshold. Collectively, these data suggest that a double-hit strategy to eliminate Tsc1 in discrete neuronal populations generates TSC-associated cortical lesions, providing a model to uncover the mechanisms of lesion formation and cortical hyperexcitability. In addition, the absence of glial reactivity argues against a contribution of astrocytes to lesion-associated hyperexcitability. 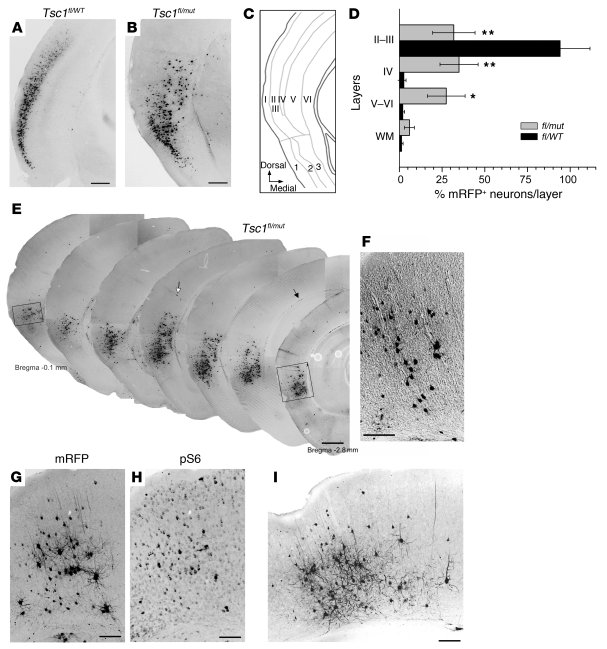