Activating mutations in the Ras alleles are found frequently in tumors, making the proteins they encode highly attractive candidate therapeutic targets. However, Ras proteins have proven difficult to target directly. Recent approaches have therefore focused on identifying indirect targets to inhibit Ras-induced oncogenesis. For example, RNAi-based negative selection screens to identify genes that when silenced in concert with activating Ras mutations are incompatible with cellular proliferation, a concept known as synthetic lethality. In this issue of the JCI, Vicent et al. report on the identification of Wilms tumor 1 (Wt1) as a Kras synthetic-lethal gene in a mouse model of lung adenocarcinoma. Silencing of Wt1 in cells expressing an endogenous allele of activated Kras triggers senescence in vitro and has an impact on tumor progression in vivo. These findings are of significant interest given previous studies suggesting that the ability of oncogenic Kras to induce senescence versus proliferation depends on its levels of expression. 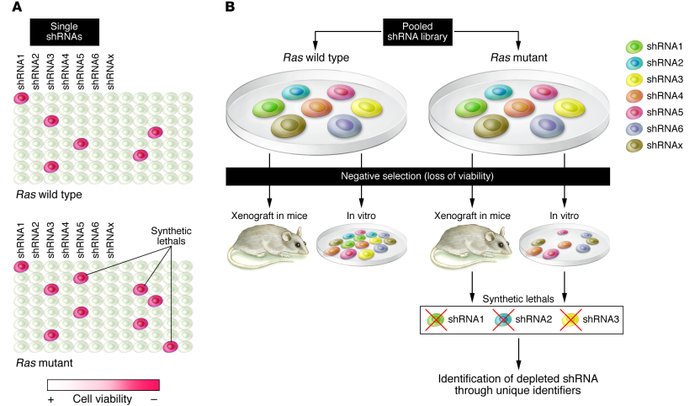 () In single-well arrays, shRNAs are transduced at 1 per well. Negative effect on growth and survival is evaluated individually by direct comparison of corresponding wells in different plates containing wild-type (reference) and mutant cells. () Pooled screens are conducted by infecting wild-type (reference) and mutant cells with an shRNA library. The cell populations are then selected either in vitro or in vivo, resulting in shRNAs with unfavorable effects on viability being depleted from the pool of cells. The depleted shRNAs are then identified through bar code tags.