Individuals infected with HIV-1 progress to AIDS at different rates. Rapid progressors develop AIDS within 2–5 years of initial infection, compared with approximately 10 years in typical progressors. Progression to AIDS is associated with impaired humoral and cellular immunity. In this issue of the JCI, Titanji and colleagues report that activated memory B (mBAct) cells are depleted in SIV-infected macaques defined as rapid progressors. Depletion was mediated by programmed death-1 (PD-1) and resulted in reduction of antibody titers specific for SIV and bacterial antigens. Interestingly, blockade of PD-1 in infected animals protected B cells from apoptosis and increased levels of SIV-specific antibodies in blood. These findings pave the way for a new therapeutic strategy aimed at improving humoral immunity in HIV-1 infection. 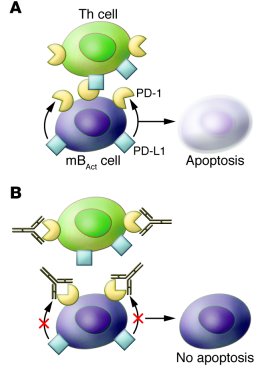 () As shown by Titanji and colleagues, PD-1 on mBAct of rapid progressors leads to apoptosis of these cells (). The signal to undergo PD-1–mediated apoptosis can be provided in an autocrine fashion from PD-1 ligands present on B cells, or from PD-1 ligands on Th cells. In this context, it is likely that PD-1 present on Th cells does not receive signaling from PD-1 ligands present on B cells, since they are engaged in autocrine binding to PD-1 on B cells. () One possible interpretation of the data presented by Titanji et al. () is that upon PD-1 blockade, the autocrine binding of PD-1 to PD-1 ligands is inhibited, thus preventing apoptosis of B cells. Thus, blocking PD-1 on B cells can improve the possibility for these cells to produce specific antibodies to SIV and other microbial antigens, by channeling T cell help toward B cells in GCs.