Individuals infected with HIV-1 progress to AIDS at different rates. Rapid progressors develop AIDS within 2–5 years of initial infection, compared with approximately 10 years in typical progressors. Progression to AIDS is associated with impaired humoral and cellular immunity. In this issue of the JCI, Titanji and colleagues report that activated memory B (mBAct) cells are depleted in SIV-infected macaques defined as rapid progressors. Depletion was mediated by programmed death-1 (PD-1) and resulted in reduction of antibody titers specific for SIV and bacterial antigens. Interestingly, blockade of PD-1 in infected animals protected B cells from apoptosis and increased levels of SIV-specific antibodies in blood. These findings pave the way for a new therapeutic strategy aimed at improving humoral immunity in HIV-1 infection.

Two-phase model for depletion of mBAct from circulation. 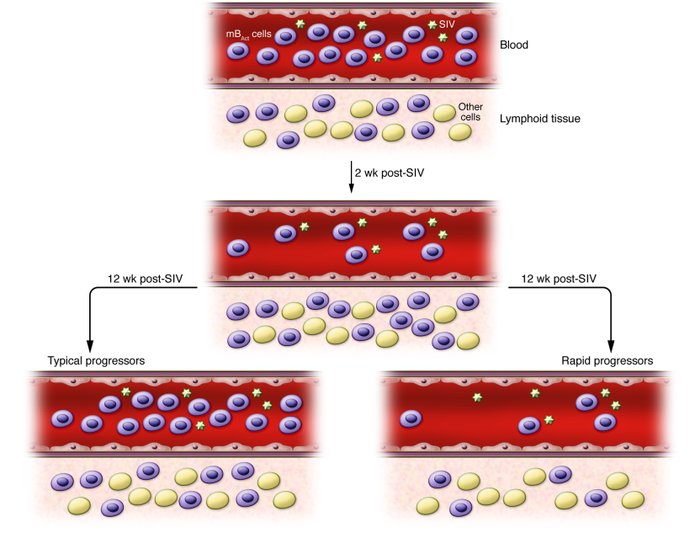 The model outlined here is based on data generated by Titanji et al. () and Peruchon et al. (). During the early stages of SIV infection (2 weeks), mBAct cells leave the blood to home to lymphoid tissues. At 12 weeks after SIV infection, mBAct cells migrate from the lymphoid tissues and rebound in the blood of typical progressor macaques and, to a much lesser extent, in the blood of rapid progressors. This model implies that mBAct in rapid progressors die through apoptosis in lymphoid tissues, according to a mechanism related to PD-1 signaling on B cells (see Figure ).