Paradise General: Riding the surge at a combat hospital in Iraq 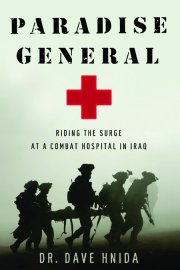 What would prompt a 48-year-old family doctor with four children to join the Army Reserve and serve a couple of four-month deployments at combat hospitals in Iraq? Having done so myself at age 53, I could not resist Paradise General, Lieutenant Colonel Dave Hnida’s memoir.

A family doctor in Littleton, Colorado, Hnida joined the army at age 48. He attributes the decision not to patriotism, love of adventure, or the need to escape a bad situation but to an accumulation of traumatic events that he felt had to be faced in a crucible of fire.

His father was a factory worker who had been a lieutenant, leading men to their death at Anzio Beach in World War II. He never got over memories of killing, flying body parts, and the fear of failure. After decades as “a mean drunk,” he told his son (then a college senior) about his demons, said, “I hope I wasn’t a bad father,” and died four days later.

The next trauma was the loss of nine of his young patients in the 1999 massacre at Columbine High School. He said of that time, “and as they fell, so did I.”

Soon after, Hnida’s daughter was raped by a college teammate, which left her with “days of darkness” and her father with rage and guilt. “It seemed the only way to lift myself out was to serve penance: do something to protect . . . young people. Memories of my Dad’s experiences resurfaced, and I suddenly knew where I was needed, where I could find help, where I might find peace. That place was war.”

Needless to say, it was an unusual approach to self-therapy (“I hoped I was setting a good example instead of playing the over-the-hill fool”), but it seems to have worked.

Like most doctors in private practice, he had no enemies at home but insurers and hospital administrators and no boss. Suddenly, he found himself a major in the army, ordered around (often gratuitously) by younger men, an experience I had as well. Whereas I felt my ignorance of regulations warranted it, Hnida lipped off like Alan Alda in MASH. But he had the good fortune to work at a field hospital whose doctors (all middle-aged reservists) banded together to survive the imperious colonels.

In 2004, Hnida served on convoys transporting detained insurgents to Camp Cropper (formerly Abu Ghraib), at which Saddam Hussein was held and had ordered tens of thousands tortured and killed. Hnida acknowledges the 2003 abuse of insurgents there by rogue American soldiers, who were jailed for it.

His second tour was at a field hospital in Tikrit. Before deploying, he had the same cursory medical exam I’d had: an audiogram, a few vaccinations, and a review of medical history. If you’d had a checkup in the past few years and reported no recent concerns, the army did not do a physical or psychological exam prior to deployment. (As assistant secretary of defense, I worked to change that in 2007, though the examination is still not as thorough as I tried to make it.)

Another parallel was Hnida’s (and my) fear that we were not medically prepared for work in a combat hospital: the hours are long and the injuries are shocking due to the power and proximity of roadside bombs. Most field hospitals had no neurosurgeon, ophthalmologist, or vascular surgeon and sometimes not even an orthopedist. We did the best we could, and — as published data reveals — managed exceptionally well, because of well-trained, courageous medics and corpsmen and a superb system of resuscitation and hemorrhage-control surgery, followed by immediate evacuation in flying ICUs.

New injuries, new teammates and equipment, 100-hour work weeks, taking (or evading) orders from young colonels, and the risk — however small — that one of the mortars or rockets fired by poorly trained insurgents would hit the canvas hospital, chow hall, or the thin aluminum “hootch” in which we slept, all made for an intense experience. It brought back the loneliness, self-doubt, silliness and rebelliousness, anger, and bonding that most physicians left behind with their internships.

And it made it hard to fit in again when we got home. A part of Hnida was left behind in Iraq, and he was wiser from his experience. As I observed in myself and dozens of other reserve doctors who had deployments like his, we — like Hnida — were shaken by the experience but eventually adjusted and stopped expecting garlands and parades. We rarely run into the patients we treated, but there is a certain satisfaction in having been there and done our best, and it is particularly helpful when we see patients who served. We find ourselves spending a little more time with them (especially those who are still readjusting) and helping their families and employers understand that most of them will emerge stronger, wiser, and gentler leaders and teammates because of the experience.

Readers who have served will find a few smiles and chuckles in this war diary, while those who have not may be tempted to join the Army Reserve and make a good organization great. If you do, Hnida’s book is fair warning that you — and your family and civilian medical practice — will be changed as well and mostly for the better.