Why antibodies disobey the Hippocratic Oath and end up doing harm: a new clue

Why antibodies disobey the Hippocratic Oath and end up doing harm: a new clue

The appearance of methicillin-resistant Staphylococcus aureus (MRSA) as an endemic microbe, first in hospital and health care settings and more recently in the community, has led to a disastrous situation in which use of the available antibiotic armamentarium is increasingly ineffective and spawns further antibiotic resistance. This vicious cycle highlights the pressing need for an S. aureus vaccine. However, to date, clinical trials with S. aureus vaccines have not demonstrated sustained efficacy. In this issue of the JCI, Skurnik and colleagues report that specific antibodies to two different S. aureus surface polysaccharides, which independently promote effector cell killing of S. aureus in vitro and protection against S. aureus in animal models, bind to and abrogate the activity of one another when they are combined. This fascinating finding suggests a new paradigm to explain the failure of antibody immunity to S. aureus.

The outcomes of infection with staphylococci. 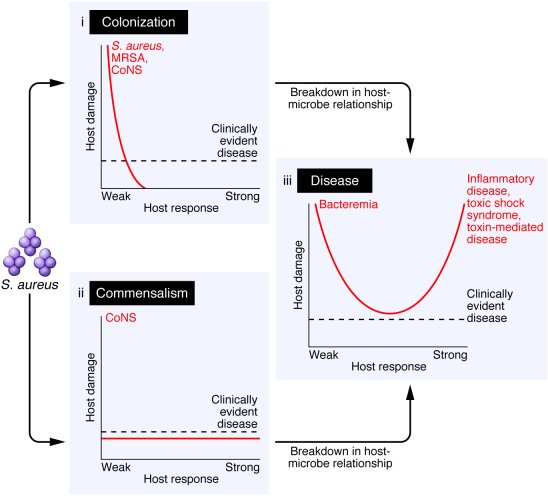 The outcomes of infection with staphylococci, using and coagulase-negative staphylococci (CoNS) as examples, are depicted based on the damage-response framework (). is acquired by person-to-person transmission. If it is not eradicated, the acquisition of constitutes a state of infection, which can have different outcomes, including (i) colonization, (ii) commensalism, or (iii) disease. Colonization can be transient, resulting in elimination, or persistent. Colonization is maintained as an asymptomatic state because the host-microbe relationship does not result in sufficient host damage to translate into a symptomatic state. The horizontal line above the axis (i, ii, and ii) represents the theoretical threshold above which the amount of host damage translates into clinically evident disease. The red curves in each panel represent the outcome of host-microbe interaction, depicting host damage as a function of the host response. When there is a breakdown in the host-microbe relationship that impairs or reduces host immunity — such as that caused by disruption in the normal host microbial community (microbiota) by broad-spectrum antibiotics or radiation, catheters that enter a potential portal of microbial entry, cytotoxic therapies, surgery, genetic defects that compromise innate immunity and the inflammatory response, or as-yet-unknown factors — there is an increase in host damage, and (iii) disease is manifest. Disease can occur in the setting of a weak or a strong host response, as manifested by bacteremia in the absence of an inflammatory process or by toxic shock syndrome and other inflammatory conditions, respectively. In the state of commensalism, the host-microbe relationship is one of symbiosis. This state (depicted in ii) pertains to the CoNS, which are part of the normal host microbiota.