The efficacy of cancer treatment by radiation and chemotherapeutic drugs is often limited by severe side effects that primarily affect the hematopoietic system and the epithelium of the gastrointestinal tract. Progress in understanding differences in the mechanisms involved in the responses of normal and tumor cells to genotoxic stress has led to the development of new rational approaches to selective protection of normal cells, such as suppression of apoptosis by pharmacological inhibition of p53 or activation of NF-κB. Another promising approach presented in this issue by Johnson et al. is based on the idea of using pharmacological inhibitors of cyclin-dependent kinases (CDKs) to convert normal cells into a radioresistant state by inducing reversible cell cycle arrest at the G1/S transition. The evidence indicates that this approach is likely to be specific for protection of normal cells and may, therefore, have clinical potential as an adjuvant in anticancer therapies. 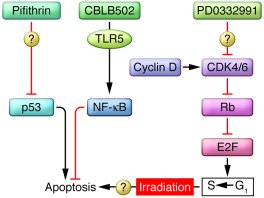 All the mechanisms depicted are based on the presumption that apoptotic cell loss is a central event in both the HP and GI components of acute radiation syndrome. Small molecules known as pifithrins (), acting through unknown mechanisms, inhibit p53-mediated apoptosis, thereby rescuing HP progenitors. The flagellin derivative CBLB502 activates NF-κB by inducing TLR5 signaling, also leading to suppression of apoptosis. Unlike p53 inhibitors, CBLB502 is effective not only against the HP but also the GI component of acute radiation syndrome (). Constitutive activation of CDK4/6 frequently occurs in tumors (e.g., by overexpression of cyclin D), leading to hyperphosphorylation of the tumor suppressor protein Rb, blocking its ability to repress the E2F family of transcription factors that are essential for cell progression from the G1 to S phase of the cell cycle. As shown in this issue by Johnson et al. (), the synthetic small molecule PD0332991, a specific CDK4/6 inhibitor with unknown mechanism of action, protects the HP system from radiation damage, presumably by inducing Rb-mediated quiescence associated with suppression of apoptosis.