Genius on the edge: The bizarre double life of Dr. William Stewart Halsted 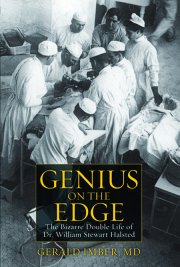 This biography is the first of William Stewart Halsted in a half century. The author acknowledges it was not intended to be the definitive biography of America’s greatest surgeon but rather to tell of his life. Imber, himself a surgeon, has outlined with insight, the unlikely coincidence that was the source of Halsted’s magic: his rehabilitation from serious illness at Johns Hopkins just as this unique institution opened and his lifelong narcotic addiction. Imber focuses on Halsted’s personal life, which is the stuff of legend: the greatness achieved by this drug-craving Jekyll and Hyde, his unexplained disappearances, his probable closeted homosexuality.

Born of a wealthy New York family in 1852, Halsted was educated at Yale and Columbia’s medical school. After brief training in New York hospitals and two years visiting European clinics, he became one of New York’s most successful surgeons — fast, innovative, and bold. The gregarious young man and a friend shared a well-appointed house, at which they frequently entertained young professional men.

In discovering (through self-experimentation) that cocaine produced local anesthesia, Halsted became addicted. Hospitalizing himself for detoxification, he accomplished only a switch from cocaine to morphine. The brilliant young surgeon was compelled by his illness to give up his peripatetic New York life and relocate to Baltimore at the invitation of his friend who would become the first dean of Johns Hopkins, William Welch, with whom he lived for several years and became completely absorbed by a contemplative, research-based life. Initially confined to research, Halsted proved himself sufficiently within two years to be named chief of surgery. For the next 30 years, Welch and his other powerful faculty friends put up with his eccentricities, long unexplained absences, and total lack of interest in teaching students other than the best of his residents.

Both in personality and surgical style, Halsted had undergone a striking metamorphosis. The electricity had gone out of the extroverted, young New Yorker. Gone also was the bold, rapid surgeon, replaced by a methodically slow, meticulous operator. Despite this change, or in fact probably because of it, Halsted made a series of landmark contributions in treatment of breast cancer, hernia, thyroid, intestinal, biliary, and vascular surgery. Most of these innovations are now outmoded, but two others became the basis of modern surgery.

The first was a deliberate approach to operative surgery based on laboratory research, emphasizing careful asepsis, meticulous hemostasis, gentle handling of tissues, and attention to physiologic changes. Halsted’s obsessive adherence to these principles required lengthy operations at a time when surgeons were rated by their speed. The result of Halsted’s method was safety in surgery. His outcomes proved so superior that eventually all surgeons would adopt “Halstedian” technique.

The second innovation was a revolutionary system of training surgeons: carefully selecting of a large group of interns and over a period of years, choosing the best few, who were then given graded responsibility, so that as senior residents they required no supervision. The survivors of this pyramidal system were the subsequent generations of academic leaders, through which US surgery became preeminent in the world. Halsted’s residency system is considered by many to be his greatest contribution.

Whether Halsted was a homosexual, as Cushing believed, is supported only by innuendo. His marriage at age 40 was to a plain woman who wore masculine clothing. In their large house, she and Halsted had separate quarters. Assessment of Halsted’s sexual preference was recently confounded by discovery of profoundly affectionate letters he wrote to a woman 40 years his junior.

The Jekyll and Hyde simile is fully explored by Imber. In the hospital, Halsted was stiff, painfully shy, reclusive, unapproachable, often severe, sarcastic, and even cruel. This was the only side seen by students, residents, and most others. But with his few close friends, at his club after his afternoon morphine, his charm, humor, and animation approached his demeanor of the pre-cocaine New York era. During routine 4–5 month vacations on his farm, where he was similarly relaxed and happy, he could be a delightful companion or host.

While Imber skillfully places Halsted in the social setting of his era, he devotes little space to the medical world other than Hopkins. He writes “there was Hopkins and then there was everywhere else.” While one acknowledges that Hopkins as an institution and Halsted as a surgeon revolutionized American medicine, there were other medical centers and other important surgeons, especially several in Europe from whom Halsted borrowed some of his best ideas.

The book is well researched and accurate. Purists might object to an occasional exaggeration. For example, in the prologue’s account of his emergency operation on his mother, Halsted is said to have “successfully performed the first known operation to remove gallstones.” In reality, J.S. Bobbs of Indianapolis had done so 5 years prior.

Lay readers of Imber’s homage to this strange surgical genius should be intrigued by his enigmatic life and his monumental accomplishments in the face of a lifelong handicap. For surgeons and medical historians, there will be no revelations, but emphasis of the fascinating Halsted personality will make it a good read.