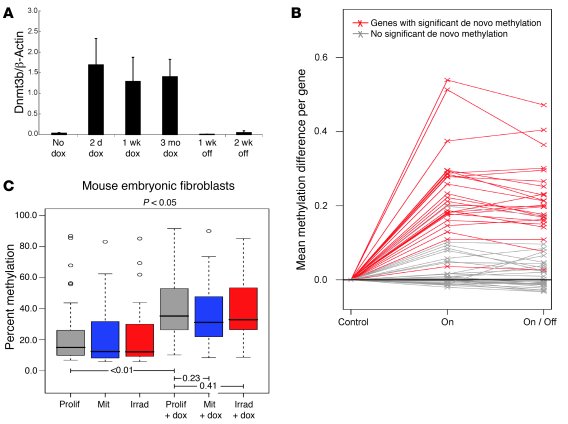 () Dnmt3b transgene expression in colon epithelial cells in vivo was activated within 2 days of dox administration and returned to baseline within 1 week of dox withdrawal ( = 2 each; quantitative PCR analysis, mean ± SD). () Dnmt3b was induced in transgenic mice for 5 months (On, = 5), and a subset was followed up for an additional period of 4 months after dox withdrawal (On/Off, = 5). Controls were age-matched to the On/Off group ( = 4). Almost all genes that underwent significant de novo methylation ( < 0.01, test) were equally methylated in the On and On/Off groups. () Dnmt3b-mediated de novo methylation was analyzed in dividing (prolif, = 5) and nondividing mouse embryonic fibroblasts (mit, mitomycin C, = 3; irrad, γ-irradiated, = 2) in the absence of dox or after 14 days of dox-induced Dnmt3b transgene expression. Box plot shows combined methylation data of genes with significant de novo methylation in proliferating cells ( < 0.05, paired test; = 25). Box denotes interquartile range; line within box denotes median; whiskers denote 1.5× interquartile range; symbols denote outliers. Significant Dnmt3b-mediated de novo methylation was detected in both proliferating and growth-arrested cells, which suggests that cell division is not required for this process. values between groups are shown by brackets.