Dual function of MyD88 in RAS signaling and inflammation, leading to mouse and human cell transformation

Dual function of MyD88 in RAS signaling and inflammation, leading to mouse and human cell transformation

Accumulating evidence points to inflammation as a promoter of carcinogenesis. MyD88 is an adaptor molecule in TLR and IL-1R signaling that was recently implicated in tumorigenesis through proinflammatory mechanisms. Here we have shown that MyD88 is also required in a cell-autonomous fashion for RAS-mediated carcinogenesis in mice in vivo and for MAPK activation and transformation in vitro. Mechanistically, MyD88 bound to the key MAPK, Erk, and prevented its inactivation by its phosphatase, MKP3, thereby amplifying the activation of the canonical RAS pathway. The relevance of this mechanism to human neoplasia was suggested by the finding that MyD88 was overexpressed and interacted with activated Erk in primary human cancer tissues. Collectively, these results show that in addition to its role in inflammation, MyD88 plays what we believe to be a crucial direct role in RAS signaling, cell-cycle control, and cell transformation. 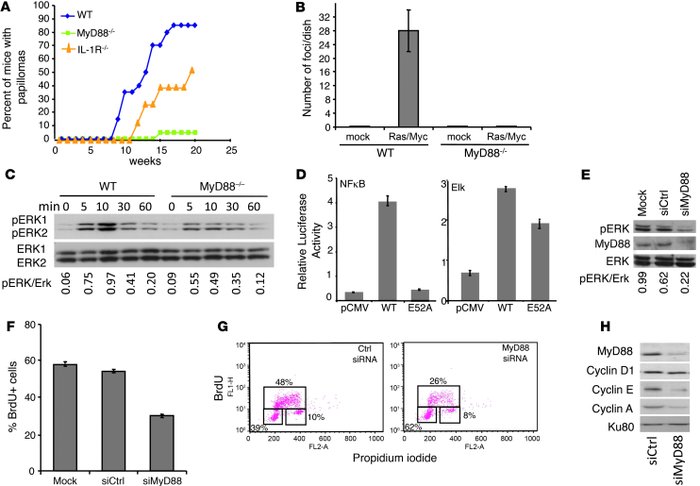 () Incidence of skin papilloma in WT, , and mice ( = 20 per group) subjected to a 2-stage carcinogenesis (DMBA and TPA). () Quantification of foci developed in WT and MEFs transfected with Rasv12 and Myc. () Erk phosphorylation is reduced in MEFs treated with FGF for the indicated times. Lower panel shows total Erk on the same blots. () Luciferase activity from NF-κB luciferase or Elk luciferase in HeLa cells overexpressing WT MyD88, MyD88-E52A, or control plasmid. Values were normalized based on Renilla luminescence. (–) A375 melanoma cell line was transfected with control (siCtrl) or MyD88-specific siRNA (siMyD88). () Western blot shows reduced constitutive Erk phosphorylation in MyD88 siRNA–treated cells. () Decreased percentage of cells incorporating BrdU after a 1-hour pulse. () BrdU/propidium iodide profile showing a block in the G1/S transition of the cell cycle. Boxes (clockwise starting from lower left) represent populations in G0/G1, S, and G2/M, respectively. () Western blot showing reduced expression of cyclins A and E, but not of cyclin D, in MyD88 siRNA–treated cells. Ku80 is a housekeeping protein used as a gel-loading control. Bar graph data represent mean ± SEM.