Chikungunya disease is a severely debilitating, mosquito-borne, viral illness that has reached epidemic proportions in Africa, Asia, and the islands of the Indian Ocean. A mutation enhancing the ability of the chikungunya virus (CHIKV) to infect and be transmitted by Aedes albopictus has increased the geographical range at risk for infection due to the continuing global spread of this mosquito. Research into disease pathogenesis, vaccine development, and therapeutic design has been hindered by the lack of appropriate animal models of this disease. The meticulous study reported in this issue of the JCI by Labadie et al. is one of the first reports describing CHIKV infection of adult immunocompetent nonhuman primates. Using traditional and modern molecular and immunological approaches, the authors demonstrate that macaques infected with CHIKV are a good model of human CHIKV infection and also show that persistent arthralgia in humans may be caused by persistent CHIKV infection of macrophages. 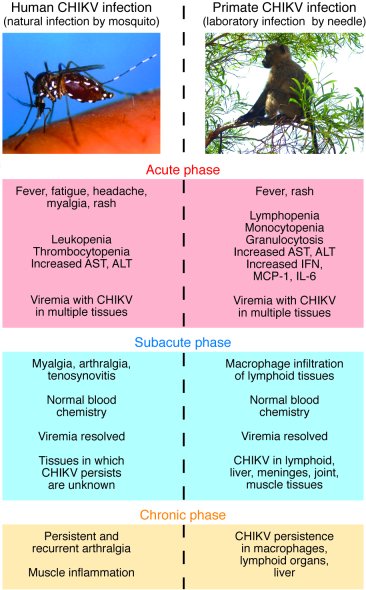 In their study in this issue of the , Labadie et al. describe the stages of symptoms of CHIKV infection seen in their primate model as having 3 phases: acute, subacute, and chronic (). These symptoms may be correlated with recently published observations of the symptoms in human cases of chikungunya fever (, , , ). In the acute phase, nonhuman primates show high viremia (approximately 108–109 viral RNA copies/ml), fever, and rash. They also have increased levels of aminotransferase, including aspartate transaminase (AST) and alanine transaminase (ALT), as well as increased expression of IFN, MCP-1, and IL-6. The nonhuman primates also have abnormal blood chemistries, including lymphopenia, monocytopenia, and granulocytosis. Humans in the acute phase of chikungunya fever present with fever, fatigue, headache, myalgia, and rash as well as increased AST and ALT. Viremia in humans ranges from 103 to 1010 viral RNA copies/ml. Leukopenia and thrombocytopenia are common. During the subacute phase in nonhuman primates, there is macrophage infiltration, and CHIKV is present in lymphoid tissue, liver, meninges, joints, and muscle. The subacute phase is not well characterized in humans, but includes the persistence of myalgia, arthralgia, and tenosynovitis. In the chronic phase in nonhuman primates, there was CHIKV persistence in macrophages, lymphoid tissue, and liver tissue up to 2 months after infection. The chronic phase in humans includes persistent and recurrent arthralgia that can last for months to years.