How cortical neurons help us see: visual recognition in the human brain

How cortical neurons help us see: visual recognition in the human brain

Through a series of complex transformations, the pixel-like input to the retina is converted into rich visual perceptions that constitute an integral part of visual recognition. Multiple visual problems arise due to damage or developmental abnormalities in the cortex of the brain. Here, we provide an overview of how visual information is processed along the ventral visual cortex in the human brain. We discuss how neurophysiological recordings in macaque monkeys and in humans can help us understand the computations performed by visual cortex.

Example of a neurophysiological recording from a neuron in the medial temporal lobe. 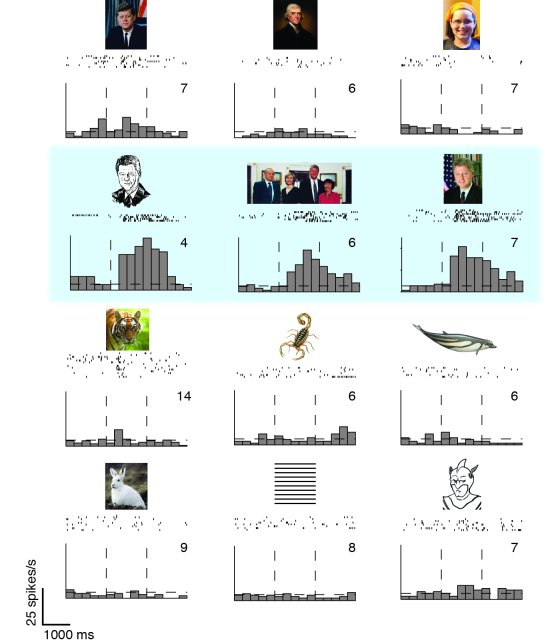 The figure is based on an experiment performed by our research group, in which the images shown to participants were similar to those shown here (see ref. for the actual images and ref. for more examples). The raster plots indicate the action potentials fired by the neuron in response to the image above the raster. Each line represents a separate repetition. Below the raster plots, we show a post-stimulus time histogram (PSTH) aligned to the stimulus onset, showing the average activity of the neuron as a function of time. The activity of this neuron increased in response to three different images of former president Bill Clinton and not to other faces or other stimuli. The neuron showed a remarkable degree of selectivity and tolerance to transformations (, ). Image credit (tiger photo): .