Am I making myself clear?: A scientist’s guide to talking to the public

Find articles by Lewenstein, B. in: JCI | PubMed | Google Scholar 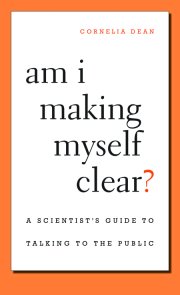 In recent years, leaders of the scientific community have called for increased interaction of their peers with the public, for “public engagement” as “civic scientists.” But how are you to do it? That’s where books like Cornelia Dean’s Am I making myself clear? A scientist’s guide to talking to the public come in. Dean, a former editor of the New York Times “Science Times” section, has provided a short, straightforward guide for scientists and engineers to the nuts and bolts of communicating their work to the public. After a series of short chapters discussing the nature of interactions between scientists and the media, Dean provides guidelines and suggestions for “telling stories on radio and TV,” “telling science stories online,” “on the witness stand,” “making policy,” and so on.

After a brief career as a science journalist, I’ve been teaching and researching science journalism for more than 20 years. That experience yields two somewhat contradictory reactions to Dean’s book: first, it is very good, and every scientist should read it and rely on it. Second, Dean has unfortunately missed some tremendous opportunities to address important issues.

First, the good news. Dean provides much excellent advice: “Good writing is clear. Assess your own by stepping back and looking at every specialist word and concept . . . . Ask yourself who knows what it means and who does not. Use straightforward language and verbs in the active voice. (If you don’t know what I mean by this term, buy a good usage manual. You need one)” (page 132). She quotes a Los Angeles Times reporter advising that material written for the World Wide Web be kept to the amount that can be read in two minutes. “I can already hear researchers objecting that it is pointless to try to communicate seriously with people whose attention span limits them to a minute or two per item,” Dean writes. “But if you are interested in reaching an audience, you must consider the capacities of that audience” (page 115).

Though there is little new in what Dean has to say, she provides a thorough compilation of standard advice about science journalism, adding in the legal and policy contexts. She updates this advice for the world of the Web, blogs, and e-mail. Her suggestions are thoughtful and useful.

One of the recurring issues that Dean addresses is accuracy. She talks about the need to develop sound bites (even for print). One time, Dean says, a colleague told her she was droning on about sediment transport, sea-level rise, and building permits. So Dean developed a sound bite: “Through greed and ignorance, Americans are destroying the landscape they love the best, the beach.” It was, she says, “accurate (or accurate enough)” (page 68). To be “accurate enough,” she says, is the essence of science journalism. One has to learn which details to leave out, which numbers to round off, and which scientific arguments are central to the particular issue at hand.

Yet this good advice is simultaneously the essence of the missed opportunity. Several chapters later, talking about the need to prepare oneself for giving testimony in a courtroom, Dean refers to “making sure that everything you say is absolutely accurate” (page 187). This is precisely the point of contention between journalists and scientists. When is something that is “accurate enough” not “absolutely accurate”? Dean doesn’t say. Nor does she reflect on the complexities of scientific practice. Dean advises science journalists to wait until work has been published in peer-reviewed literature before reporting on it, but overlooks the wide variety of what constitutes peer review and the role of pre-prints and other forms of information distribution. She writes that “for some reason, scientists notoriously use the passive voice,” never acknowledging that scientists may choose it to keep the grammatical focus on the object instead of the person. Scientists may also choose the passive voice specifically to remove themselves from the action, following the scientific norm of dispassionate reporting.

Dean is an excellent reporter and writer herself, who has taken on some challenging topics. Yet in this book she has not come to terms with the subtleties of the social processes of science (and of journalism). She has not explained why having scientists simply learn to write or speak more clearly may not solve the problem of the public’s understanding of science. She has not addressed the difference between “talking to” the public (from her subtitle) and “public engagement” (as called for by scientific leaders).

Perhaps the problem is mine. I may simply be insisting on an overly picky accuracy that addresses all the nuances of the interaction of scientists and the public. Dean’s book is, after all, accurate enough about many aspects of how scientists can better present their work to nonscientists. But the missed opportunity to help scientists understand more fully why it is so difficult for them to interact with the public may delay the necessary discussion about why, despite the often very good guidance in this book, Dean’s advice may not solve their problems.