The healing of America: A global quest for better, cheaper, and fairer health care 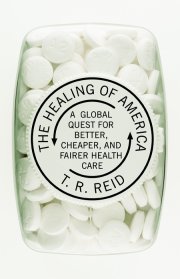 T.R. Reid’s The healing of America is an engaging but thin epistle for universal health insurance coverage in the US. It is engaging because Reid, a long-time correspondent for the Washington Post, knows how to tell a good story. His book details his international quest for relief for his stiff shoulder. The cures he encounters range from a Tibetan-style urine tasting and Ayurvedic therapy in India, to the “wait and see” attitude of the Brits, to the surgical zeal of the US, the arch villain of the piece. His vignettes of some of the important, colorful figures who shaped national health care systems, such as Germany’s Iron Chancellor Otto von Bismarck, also add zest.

But where Reid succeeds in the journalist’s metier — stories about personal encounters and people — he overreaches when he attempts to weave these episodes into a compelling comparison of the value for money of different health care systems.

Reid’s data about the quality of health care consist mostly of his personal encounters, but can Reid, a well-seasoned journalist, be so naive as to believe that the medical care he receives as the employee of a world-famous newspaper is similar to that of the average Joe, Abir, or Heinz? Perhaps for this reason, Reid ignores the brutal inequity of the government-controlled health-care systems he so admires: rich, well-connected, and articulate people have much better access to health care. As the British and Canadian governments have long openly bemoaned, universal coverage does not mean equal access. Reid also ignores the fact that more than 10% of the population in single-payer countries such as the UK and Spain spurn single-payer coverage, opting instead to buy private health insurance that enables them to use private sector medical care providers.

The statistics Reid offers are thin gruel. They do not consist primarily of raw data — the stuff of genuine scientific analysis — but rather of other people’s opinions of what constitutes excellence. Because a primary component of these quality ratings is whether a country has universal health care, the US cannot rate well. The conclusions he draws from his few data are dubious. For example, Reid asserts that infant mortality, a statistic for which the US rates poorly, is caused primarily by the absence of universal coverage. But surely the following additional explanations, neither of them considered, have some explanatory value: US cultural attitudes translate into more high-risk pregnancies coming to term (compared to other countries in which they would likely be terminated before birth) and these statistics are likely considerably affected by the diverse US population.

The cited data are also notable for what they do not contain. Absent are statistics for areas in which US health care excels, such as risk-adjusted age at death from cancer, results achieved in part because of the willingness to spend more on expensive cancer drugs and other therapies. Rather, Reid dismisses problems that occur in single-payer countries because of stringent funding — impossibly long waiting lists, doctor strikes (and, unmentioned by him, doctor fraud), and the death of thousands due to a shortage of resources during a heat wave in France — as inevitable but not very consequential artifacts of not spending as much as the US.

I grew particularly wary of Reid’s data as I read his account of US private health insurers (page 37). Reid erroneously avers that they use the term “medical loss” to describe their medical care expenses. But, after I made this observation more than a decade ago, US insurers stopped using this term. More alarming was Reid’s statement that most insurers spend 20% of their revenues on administrative expenses. Although Reid cites US Securities and Exchange Commission (SEC) filings in the text, his reference to this (largely incorrect) statement does not cite the SEC but rather a Wall Street Journal story about one insurer and a 2005 industry insider newsletter. The SEC filings of the insurer cited in the Wall Street Journal story contain a different administrative expense from that cited (I could not verify his other source because there is no public access to that newsletter).

Last, Reid displays either a healthy dose of financial naivete or knee jerk anti-business attitudes when he singles out nonprofit insurers as the sine qua nons of the ideal system of universal coverage. In his view, nonprofits have no incentive to use their money for other than their clients. This view ignores many nonprofit scandals, such as nonprofit US hospitals that earn millions in profits while neglecting the uninsured. Consumers are protected only when they are fully informed and government vigorously prosecutes fraud and abuse, not by preferring one organizational form to others.

If you are wondering, I too have long supported universal coverage and am no fan of noncompetitive private health insurers. But, sadly, this thin book did nothing to reinforce the validity of these views.