Every patient tells a story: Medical mysteries and the art of diagnosis 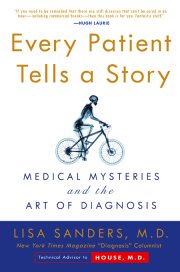 Lisa Sanders, a general internist on the faculty of the Yale University School of Medicine, has become widely known nationally as the author of a collection of medical stories in the New York Times Magazine series entitled Diagnosis. In each Diagnosis column, Sanders presents to the reader the symptoms of a real-life medical or surgical illness that prompted a patient to consult his or her physician or go to a hospital emergency room. She then describes how the physician pursued the diagnosis. Often the case is a difficult one and, not infrequently, one or more physicians missed a vital clinical clue or the correct diagnosis. Eventually, consultation by a more experienced and/or specialized physician is initiated. In the end, each medical mystery is solved and the underlying cause and therapeutic management of the disease or condition are described. Every patient tells a story: medical mysteries and the art of diagnosis is a collection of similar stories. Selected cases vary from common diseases such as pernicious anemia to oddities such as cannabinoid hyperemesis, in which chronic marijuana smokers vomit repeatedly but can relieve hyperemesis by taking hot showers or baths.

In addition to telling these clinical stories, Sanders expresses a marked interest in the training of young physicians and the retraining of physicians in practice. She is an evangelist for the return of the physical examination and its use by physicians who have abandoned it in favor of dependence on laboratory-, CT-, and MRI-based diagnoses. She is not against the latter but strongly argues for the implementation of both, believing that physical exams compete well with technical diagnostic procedures.

Sanders advocates testing physician competence in everything from listening to heart sounds to diagnostic exercises involving actors mimicking patients. She reviews the literature on physician errors and their causes, providing advice on how they might be overcome.

As one active clinically in both a large public hospital for which individuals of low socioeconomic status account for a significant proportion of admissions and in an academic hospital, my experience is that the mystery of disease and difficulty of diagnosis are not as ubiquitous as this book suggests. A desire to give the diagnostic process the feel of a detective story may have influenced this. In this vein, some stories tend to be a little stereotyped: the initial physician or physicians have difficulty with the diagnosis, and then (sometimes just in time) a more experienced and knowledgeable physician provides the correct answer.

An illustration of a medical mystery that should not have been the case is that of the patient with pernicious anemia referred to above. The young patient, Powell, is described as having chest pain, severe anemia, and neuropathy, which was not immediately recognized. Sanders writes, “Although Powell didn’t suffer any permanent harm, it took four visits to the emergency room to get there” (to the diagnosis of pernicious anemia). No one with such serious symptoms can visit an emergency room without a hemogram being obtained. This patient’s hemogram would have shown anemia and almost certainly an elevated mean cell volume. Then perhaps a smear would have been ordered, confirming hypersegmented neutrophils. It is hard to imagine, given the anemia and neuropathy, that pernicious anemia was not suspected on the first ER visit.

I found only the occasional error or oversight in Every patient tells a story. An example is the statement that the murmur of mitral stenosis radiates to the edge of the left chest; mitral insufficiency does this, not stenosis, which is tightly localized. Sanders misses an opportunity to define Münchausen syndrome and leaves out important clinical clues such as ceruloplasmin in a case of Wilson disease and increased ferritin in adult Still’s disease. However, one needs to remember that this is not an exhaustive textbook of medicine.

Sanders is proud to be the medical consultant for the American network television show House M.D., in which the show’s fictional protagonist, Dr. Gregory House, employs a series of unorthodox diagnostic approaches and therapies to resolve the mysterious patient symptoms presented at the opening of each episode. Sanders writes, “In the show, Dr. Gregory House doesn’t value patient history. Indeed, he frequently tells his trainees that they shouldn’t believe their patient’s version of his illness and symptoms because ‘everybody lies.’” Sanders, of course, believes patients’ stories, as the title of her book declares.

I respect Sanders as she reveals herself in this book. She seems to love the practice of medicine, as do all true physicians, but she is not overprotective of it — she acknowledges its flaws and expresses her desire and ideas for enhancing our approach to disease diagnosis and patient care. Every patient tells a story is well written, and while it may be a little too technical at times for nonmedical readers and not quite scientific enough at times for physicians, both audiences will likely enjoy it.