Tuberous sclerosis complex (TSC) is a dominantly inherited disease that is characterized by the growth of multiple benign tumors that are often difficult to treat. TSC is caused by mutations that inactivate the TSC1 or TSC2 genes, which normally function to inhibit activation of mammalian target of rapamycin signaling. In this issue of the JCI, two studies reported by Karbowniczek et al. and Ma et al. link TSC inactivation with activated Notch signaling (see the related articles beginning on pages 93 and 103, respectively). Using a variety of approaches, both studies show that inactivation of TSC leads to Notch1 activation. Furthermore, studies in tumor cells suggest that inhibiting Notch slows growth of the tumor cells. Although much remains to be learned about the precise mechanisms by which TSC loss leads to Notch activation, the newly identified link of TSC to Notch provides the rationale for testing Notch inhibitors in TSC-associated tumors. 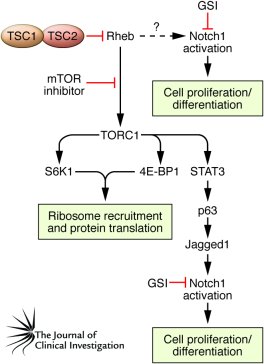 This schematic illustrates the potential mechanisms of Notch activation proposed by Karbowniczek et al. () and Ma et al. () in this issue of the . TSC1 and TSC2 heterodimerize to inhibit activation of the Rheb-GTPase. In the absence of TSC1 or TSC2, Rheb is constitutively active, which leads to Notch activation by a TORC1-independent mechanism, as suggested by Karbowniczek et al. (), and/or a TORC1-dependent mechanism, as suggested by Ma et al. (). The TORC1-independent mechanism of Notch1 activation remains to be elucidated, as indicated by the dotted line and question mark. In the TORC1-dependent pathway described by Ma et al., TORC1 activates STAT3, which leads to p63 upregulation of the Notch ligand Jagged1 and Notch1 activation. Notch is likely to influence cell differentiation and proliferation; however, it may also have effects on cell survival, cellular metabolism, and other cellular processes. Additional, important TORC1 targets are ribosomal protein S6 kinase polypeptide 1 (S6K1) and eukaryotic translation initiation factor 4e–binding protein 1 (4E-BP1), which have important functions in ribosome recruitment and protein translation. mTOR inhibitors act on TORC1; Notch inhibitors, such as GSI, act to prevent Notch signaling. It remains to be elucidated whether Notch activation occurs by a cell-autonomous or a non–cell-autonomous mechanism in TSC.