Voltage-dependent sodium channels are the central players in the excitability of neurons, cardiac muscle, and skeletal muscle. Hundreds of mutations in sodium channels have been associated with human disease, particularly genetic forms of epilepsy, arrhythmias, myotonia, and periodic paralysis. In this issue of the JCI, Jarecki and colleagues present evidence suggesting that many such mutations alter the gating of sodium channels to produce resurgent sodium current, an unusual form of gating in which sodium channels reopen following an action potential, thus promoting the firing of another action potential (see the related article beginning on page 369). The results of this study suggest a widespread pathophysiological role for this mechanism, previously described to occur normally in only a few types of neurons. 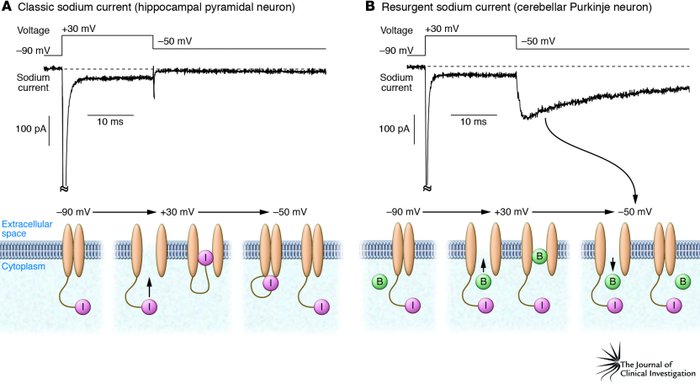 () Conventional sodium current kinetics. Top: Current recorded from a hippocampal CA1 pyramidal neuron in response to indicated voltage sequence. Bottom: Interpretation of channel gating. Channels are closed at –90 mV. Upon depolarization to +30 mV, channels activate, carrying inward sodium current. After a few milliseconds, channels inactivate, corresponding to block of each channel by an intracellular loop of the main channel subunit (particle labeled “I,” tethered to channel). Upon repolarization to –50 mV, channels partially recover from inactivation (back to non-inactivated closed state), but no current flows. () Sodium current kinetics for sodium channels carrying resurgent current. Top: Current recorded from a cerebellar Purkinje neuron in response to the same voltage sequence shown in . Bottom: Interpretation of channel gating. In addition to normal inactivation, there is a competing process behaving as if a blocking particle (B), different from the intracellular loop of the main channel subunit, can enter and occlude the channel when it is open, preventing normal inactivation. Upon repolarization to –50 mV, channels occupied by the blocking particle transiently open as the blocking particle exits the channel. The transient opening produces current at –50 mV (resurgent current). The diagram is oversimplified; in actuality, some channels inactivate normally and do not result in resurgent current. Also, when the blocking particle exits at –50 mV, channels can either return to closed state or enter the normal inactivated state. Current records redrawn with permission from (). Schematics of the changing conformation of the channels modified with permission from ().