Unchecked cell growth is a hallmark of cancer. During oncogenesis, cancerous cells become resistant to the TGF-β signaling pathway that usually keeps cell growth in check. The role of a critical mediator of this pathway, Smad4, in head and neck squamous cell carcinoma (HNSCC) remains unclear. In this issue of the JCI, Bornstein and colleagues report that Smad4 expression is decreased in malignant HNSCC and, surprisingly, also in normal-appearing buccal mucosa adjacent to HNSCC (see the related article beginning on page 3408). They also show that targeted conditional deletion of Smad4 in the head and neck epithelium of mice is alone sufficient to initiate spontaneous HNSCC, in conjunction with DNA repair gene dysregulation, genetic instability, and inflammation. These findings point to a novel function for Smad4 as a guardian gene that maintains genomic stability. 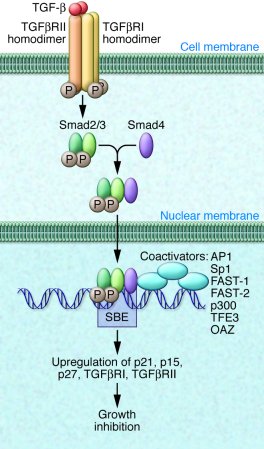 A TGF-β dimer is shown binding to a homodimer of TGFβRII, which then recruits a TGFβRI homodimer. The heterotetrameric complex allows TGFβRI to undergo serine-threonine phosphorylation, which activates its kinase activity and phosphorylates Smad2 and Smad3. These phosphorylated Smad proteins associate with Smad4, and the resultant complex translocates to the nucleus, where it can interact with coactivators such as AP1, Sp1, FAST-1 and the related transcription factor FAST-2, p300, TFE3, and OAZ (–) and corepressors (not shown) to modulate gene transcription. For example, genes encoding p21, p15, and p27 are upregulated through interactions between Smad2/3/4-coactivator complexes and Smad-binding elements (SBE). The upregulated proteins then act to inhibit cell-cycle progression and proliferation.