Fixing my gaze: A scientist’s journey into seeing in three dimensions 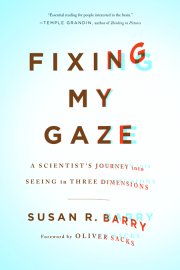 Fixing my gaze: a scientist’s journey into seeing in three dimensions, by Susan R. Barry, is a fascinating account of how an adult who was previously unable to perceive objects and space as three dimensional was able to gain that ability. As a child, Barry, now a professor of Biological Sciences at Mount Holyoke College, was cross-eyed. Although she subsequently underwent three eye surgeries that achieved successful cosmetic alignment of her eyes, she did not have any stereovision. Barry had accepted this deficit as an unsurprising consequence of her early inability to image objects simultaneously through both of her eyes and learned to gauge depth using other visual cues. However, as an adult, her gaze became “jittery,” interfering with her ability to perform necessary tasks of everyday life such as driving and reading and severely restricting her visual world. When she was 47 years old, she began vision therapy under the guidance of a developmental optometrist in order to stabilize her vision. Eventually she learned to coordinate seeing through both eyes. An unexpected outcome of acquiring this skill was that, for the first time in her memory, she began to see the world around her in three dimensions. Fixing my gaze chronicles the story of this perceptual discovery. In addition to recounting her personal triumph, Barry clearly explains the visual and clinical science needed to understand the significance of this achievement.

Barry’s story is of wide interest because neuroscientists had long regarded the adult brain as having only a limited ability to rewire itself to acquire new functions. It has been clear for some time that experience molds neural connections during critical periods that take place early in an individual’s development. After the end of these periods of great plasticity, many areas of the brain were thought to be essentially hard wired and resistant to any later change. As a consequence, the failure to establish the needed and correct neural connections during the critical developmental period was presumed to result in permanent functional deficits. Much of this formulation can be traced back to the pioneering work of David H. Hubel and Torsten N. Wiesel on the visual system, conducted in the 1960s and 1970s. A permanent stereoblind fate for strabismic individuals such as Barry, who had vision misalignments corrected late in development, was widely inferred from this work. Ironically, it was Barry’s training as a neurobiologist and her awareness of these ideas that had resigned her to believing that she would never be able to experience stereopsis.

It is always a difficult task to instill an appreciation in individuals of the wonder of acquiring a perception that they themselves are likely to take for granted. Barry does an admirable job in this regard for her readers, perhaps aided by the recent spate of three-dimensional movies that so clearly present a different viewing experience to their audience than their flat, two-dimensional counterparts. She also takes pains to demonstrate that while her adult recovery of visual function is unusual, it is by no means unique. She offers the stories of several other strabismic individuals with similar experiences to her own. Remarkably, this includes the optometrist Frederick Brock, who developed the “bead on a string” visual aide used to help Barry and others coordinate their eye movements for binocular viewing. Barry’s initial reluctance to believe that deceptively simple exercises can help bring about a major change in adult perception, even as she dedicated herself to performing them, is refreshing and anticipates the reactions of her readers. And yet despite her skepticism, change does come. While the neural basis of her newly acquired stereopsis is unknown, she offers some plausible ideas as to its origin. These are areas for future research. But visual scientists no longer reject the idea that major changes in neural connections can occur in adult brains. Indeed, such changes can be obtained by using slightly different stimulus paradigms than those needed during development. The extent to which they allow for functional recovery from visual deficits in human patients remains to be seen. The publication of Barry’s story will help inform other strabismic individuals of this potential therapy and ultimately assist in the evaluation of whether the techniques that helped her have a wider applicability. For now, much like Barry viewing her first snowfall in three dimensions, we are left to wonder what amazing capabilities our brains have yet to show us. In the end, this engaging book will leave both readers knowledgeable in the field, as well as those just looking to understand something about the visual process, pondering what else there is left to see.