The end of overeating: Taking control of the insatiable American appetite 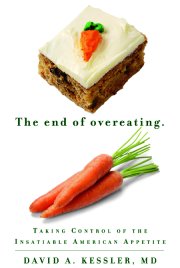 In The end of overeating: taking control of the insatiable American appetite, David A. Kessler presents an engaging perspective of the obesity epidemic. About two-thirds of adults in the United States are overweight. The number of overweight and obese children is also growing at an alarming rate. These trends have adverse consequences on health because obesity increases the risk of chronic diseases, notably diabetes, cardiovascular diseases, obstructive sleep apnea, and cancer. Obesity is also a major cause of disability and may shorten lifespan. As commissioner of the Food and Drug Administration under Presidents George H.W. Bush and Bill Clinton, Kessler led the fight against tobacco companies to place their products under federal regulation. He also pushed through legislation for nutritional labeling of food. The idea for his book came to Kessler while watching a patient on The Oprah Winfrey Show describe how her struggles with food and weight affected her life. During his tenure as dean of the Yale School of Medicine, and later the University of California at San Francisco School of Medicine, Kessler embarked on a mission to unravel the factors underlying the rising incidence of obesity. He analyzed his own eating habits, watched others eating at restaurants and other locations, reviewed publications, and interviewed basic scientists and clinicians as well as food industry executives and workers. Kessler’s theory can be summed up as follows: Modern foods, particularly American foods, are designed not to satisfy, but rather to stimulate the reward pathways in the brain, conditioning us to crave more food.

Kessler has identified sugar, fat, and salt as the major culprits of modern (American) food responsible for heightening our appetites, inducing overeating, and causing excessive weight gain. He describes how sugar, fat, and salt activate neurons involved in taste perception, reward, and conscious control of eating. He invokes dopamine and opioids as the key neurotransmitters mediating the rewiring of brain circuits. According to Kessler, eating in modern society no longer serves a primary function of mitigating hunger and replenishing energy stores. Rather, eating serves a hedonic role to satisfy our liking and wanting of food. Most of us eat out of habit instead of physiological need. This behavior is controlled by social, cultural, and other environmental cues. He also discusses how the food industry has developed hyperstimulating foods and packaged and marketed them in ways that appeal to our altered brain chemistry. Processed foods are laden with sugar, fat, and salt; the list of ingredients is often misleading; and food texture has been altered to make it easier to eat faster. Kessler cites potato chips, chopped-up meats, and cookies as examples of processed foods designed to manipulate the brain response and entice us to eat more.

Kessler theorizes that after being exposed to hyperstimulating foods, some individuals develop what is known as conditioned hypereating. He suggests that dopamine is a mediator of conditioned hypereating and cites data from studies of antiobesity drugs to bolster his argument. He worries that children are particularly vulnerable to conditioned hypereating. The book provides a treatment framework for overeating: Kessler encourages us to be aware of food ingredients and avoid cues that make us overeat. He urges a shift in our perception of processed foods, from a sense of comfort and pleasure to disgust and harm. Kessler takes aim at the food companies for exploiting our biological foibles and making us conditioned hypereaters. His answer to the threat posed by the food industry is similar to the tactics that worked against big tobacco. The public should be educated about food ingredients and their potential health risks; restaurants and food outlets should be mandated to list the calories and ingredients in their menus; and food marketing should be monitored and inaccuracies and deceptions exposed.

Overall, I enjoyed reading this book. The material is well organized and informative, and although some of the facts are repetitive, the book will benefit readers who wish to understand the regulation of eating behavior. Unlike most diet books that claim to have easy solutions for obesity, Kessler does an excellent job of carefully laying out the biological workings of the brain and detailing how overeating can be induced by food ingredients and lead to obesity and metabolic diseases. Nonetheless, Kessler’s focus on similarities between the brain circuitry for overeating and drug addiction ignores the fact that food is essential for survival, whereas other pleasurable behaviors are not. It should be noted that energy homeostasis is affected by a myriad of peripheral and central factors aside from dopamine and opioids. Furthermore, I would not give the food industry too much credit for figuring out ways to change our brain chemistry and titillate our primal reward needs. Rather, it is apparent that the food industry has taken full advantage of our concept of modernity. Most of us have no idea where our food comes from, do not prepare our own meals, want to eat whenever and wherever we wish, and engage in little physical activity. The obesity epidemic in America and worldwide demands drastic changes in food as well as in factors that promote a sedentary lifestyle.