Smallpox — the death of a disease: The inside story of eradicating a worldwide killer 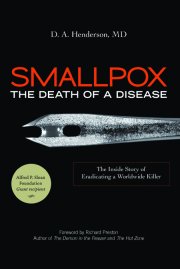 Smallpox — the death of a disease, written by D.A. Henderson, provides a personal accounting of the strategies, decisions, and combined global efforts leading to the eradication of smallpox. Henderson, a recognized smallpox expert who served as the first director of the WHO Smallpox Global Eradication Unit, discusses the events leading to the World Health Assembly’s (WHA’s) decision to commit to a major global eradication effort. He provides a firsthand, behind-the-scenes view of the politics, opinions, strategies, and personalities that enabled or hindered this massive undertaking. Medically oriented and general readers interested in public health and/or smallpox would likely enjoy reading this personal perspective on smallpox eradication.

Henderson prefaces the book by describing how his career in public health began by fulfilling a Selective Service requirement to serve in a uniformed service. This led him to a US Public Health Service position with the Epidemic Intelligence Service (EIS) at the CDC. What started out as an assignment to fulfill a requirement, admittedly approached with lukewarm enthusiasm, soon blossomed into a lifelong passion and career in public health. Henderson’s focus on smallpox began while he was chief of the CDC surveillance section. He created a smallpox unit to plan strategies for responding to and containing importations of the disease into the US, where smallpox was, at that point, eliminated as an endemic disease. The unit also initiated a program to eradicate smallpox in 20 African nations where the disease remained endemic.

Henderson provides a description of the disease and the virus, a historical accounting of its impact on the population, and a description of the early efforts to combat the epidemic. These early efforts included the use of variolation (intentionally infecting someone with smallpox virus by rubbing it into the skin) to produce a more localized, mild infection. Edward Jenner’s development of a safer vaccine (based on cowpox virus) and the subsequent achievement of larger-scale production utilizing freeze drying to provide heat stability for transportability provided the final tool necessary to attempt smallpox eradication.

In subsequent chapters, Henderson walks the reader through the discussions, sometimes heated arguments, and the political turning points for the WHA and WHO that led to a broader, more supported global commitment to eradication. He also describes the challenges during the start-up of the WHO unit charged to lead the effort. These challenges ranged from determining utilization of limited budget and personnel resources to developing overall strategies, multi-country programs, and on occasion, garnering political will and support for eradication in countries with remaining disease. The book provides more detailed descriptions of eradication efforts in Brazil, Indonesia, India, Nepal, Afghanistan, Pakistan, Bangladesh, and multiple countries in Africa, including Ethiopia and Somalia (the final two countries with smallpox). Despite specific challenges in each country, it is clear that eradication was possible only through the efforts of the dedicated, in-country program personnel working long hours for months at a time, identifying smallpox outbreaks in cities and remote villages, administering vaccine, and following up to assure that vaccinations were successful.

Henderson closes his book relating his recent experiences in returning his focus to smallpox while helping the US government address the new threat that smallpox virus now poses as a potential bioterrorist weapon. His and other previous eradication experts’ experiences with the disease, diagnosis, vaccine, control strategies, and program development were invaluable planning and policy resources for a government that thought it had closed the book on smallpox almost two decades earlier.

This book is well written and provides the reader with a personal look into the smallpox eradication effort from the vantage point of someone who lived the story firsthand. Relating his personal recollections and experiences from a viewpoint that encompasses the entirety of the eradication effort across multiple countries, the author allows the reader to gain an appreciation of the strategic and political nuances of eradicating the same disease in different places. Throughout the book, Henderson readily identifies key individuals who had significant roles in moving the eradication initiative forward and is not shy in identifying those he felt served as passive or, in some cases, active obstacles. His willingness to share these frank perceptions, even if sometimes more forthright than one might expect from a historical perspective, makes readers feel at times they are privy to details more likely to be shared by the author over a cup of coffee rather than in a book.

The findings and conclusions in this report are those of the author and do not necessarily represent the official position of the Centers for Disease Control and Prevention.