The mechanisms by which homocysteine contributes to atherothrombosis are complex and their in vivo relevance uncertain. In this issue of the JCI, Jacovina and colleagues report a unique in vivo mechanism by which homocysteine may contribute to vascular disease (see the related article beginning on page 3384). This group had previously reported that homocysteine impairs endothelial cell surface plasminogen activation by posttranslationally modifying annexin A2, the coreceptor for plasminogen and tissue plasminogen activator. They now show that an annexin A2–deficient mouse rendered hyperhomocysteinemic by dietary means has impaired fibrinolysis, perivascular fibrin persistence, and attenuated angiogenesis (angiostasis). Potential mechanisms by which homocysteine-dependent changes in endothelial phenotype link thrombosis to angiostasis are reviewed and their relationship to homocysteine-dependent vascular disease considered.

Direct and indirect effects of homocysteine on angiogenesis. 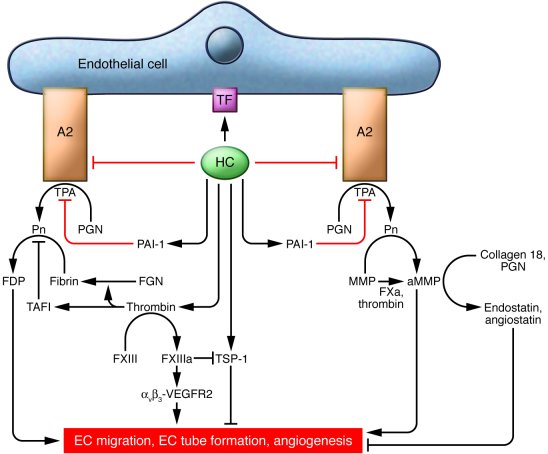