The aging process affects all aspects of the immune system, particularly the T cells. The immune system in older individuals is often characterized by lower T cell numbers, lower naive/memory T cell ratios, and lower T cell diversity. Most measures of inflammation increase with age. Why this happens, and why there is so much person-to-person variability in these changes, is not known. In this issue of the JCI, Sauce and colleagues show that removal of the thymus during infancy results in premature onset of many of these age-associated changes to the immune system (see the related article beginning on page 3070). The effect of thymectomy was particularly notable in those individuals who acquired CMV infection. Data from this study, as well as data from other observational settings, suggest that reduced thymic function and persistent viral infections combine to accelerate a decline in immunologic function.

Effect of thymectomy and CMV on markers of immunosenescence. 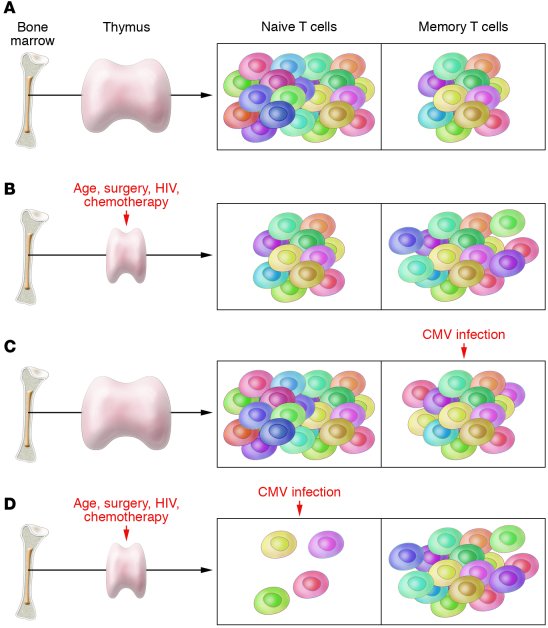 () In the presence of normal thymic function and in the absence of CMV infection, the immune system ages slowly. T cell counts and T cell function remain high, and there is no dramatic shift in the high naive/memory T cell ratio over time. () In the presence of a direct insult to thymic function (e.g., surgical removal, HIV infection), some age-associated changes to the immune system can emerge early in life. A lower than expected frequency of naive T cells is the most common observation, as shown by Sauce and colleagues in this issue of the (). () In the presence of retained thymic function, CMV infection (and perhaps other persistent infections) results in dramatic expansion of CMV-specific CD8+ and CD4+ memory T cells. Over several decades, CMV infection can result in many of the classic findings associated with immunosenescence. () In the absence of normal thymic function, the acquisition of CMV infection during early life results in the premature onset of immunosenescence, at least as defined by marked reductions in naive T cell counts. By the time such individuals reach early adulthood, their T cell population appears to share many similarities with the T cell population of very old adults (> 75 years old).