Bone undergoes a continuous cycle of renewal, and osteoclasts — the cells responsible for bone resorption — play a pivotal role in bone homeostasis. This resorption is largely mediated by inflammatory cytokines such as TNF-α. In this issue of the JCI, Yao et al. demonstrate that the NF-κB precursor protein NF-κB2 (p100) acts as a negative regulator of osteoclastogenesis (see the related article beginning on page 3024). TNF-α induced a sustained accumulation of p100 in osteoclast precursors, and TNF-α–induced osteoclast formation was markedly increased in Nfkb2–/– mice. They also found that TNF receptor–associated factor 3 (TRAF3) is involved in the posttranslational regulation of p100 expression. These results suggest that blockade of the processing of p100 is a novel strategy to treat TNF-α–related bone diseases such as RA.

Schematic representation of RANKL and TNF-α–induced signaling in osteoclast precursors. 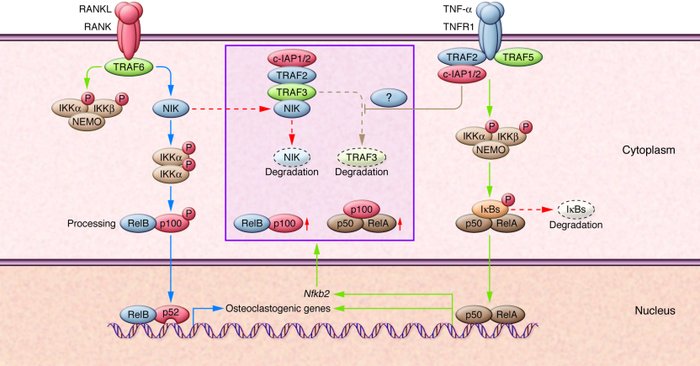 New elements of these signaling pathways, as elucidated by Yao et al. () in their study in this issue of the , are grouped within the purple box. In unstimulated cells, NIK is constitutively degraded by the TRAF3/TRAF2/c-IAP1/2 complex (red dashed arrows). RANKL activates NIK and induces both the canonical and noncanonical NF-κB pathways, which play critical roles in osteoclastogenesis (blue arrows). On the other hand, TNF-α solely activates the canonical pathways (green arrows) and induces the upregulation of TRAF3 by suppressing TRAF3 degradation (brown dashed arrow and line). TRAF3 in turn binds to and further accelerates the degradation of NIK. A decrease in NIK leads to the accumulation of NF-κB2 (p100) by suppressing its processing to p52 (blue arrows). In addition, TNF-α induces expression of in a RelA-dependent fashion. These signaling pathways lead to the accumulation of p100, thereby inhibiting osteoclast differentiation. The mechanism by which TNF-α stabilizes TRAF3 is currently unknown. The proteasome-dependent degradation pathways are indicated by dashed lines.