Magnetic appeal: MRI and the myth of transparency 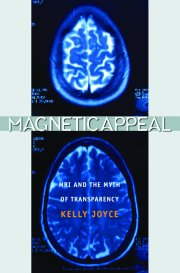 Biological and medical sciences are founded on the principle that “seeing is believing.”

The discovery of the microscope expanded the “seeable” universe to life forms beyond the bounds of resolution of the human eye, and photography of these magnified images further advanced the basic and applied sciences. Imaging techniques (optical and electronic) that combined “automatic” representations to reduce the subjectivity of the scientists/illustrators who rendered the likeness of the image seen from the point of view of the lens improved the value of imaging data (1). More recently, advances in medical sciences that depend upon the seeing-is-believing principle have been further accelerated by solution of the “occlusion problem” using techniques such as x-ray, CT, PET, and MRI that provide a “photographic likeness” of targeted organs and structures within the human body. Thus, the seeable universe is expanded to the domain of hidden objects within the walls of the human body, and another world of scientific investigation, as well as medical application, has emerged.

In Magnetic appeal: MRI and the myth of transparency, Kelly A. Joyce explores both the added value of routine images that reveal previously invisible body parts and the dangers of overinterpretation, false expectations, and issues of subjectivity related to the computational nature of the source. Reporting from interviews with radiologists and MRI technologists, Joyce captures the day-to-day work practices within hospital settings that start with the patient and the medical question and further involve image acquisition and the technologist, the reading room and the radiologist, medical interpretation, hospital economics, and work-related units. MRI usage has increased steadily since 1983, and over seven million procedures were submitted to Medicare in 2005, representing about one-sixth of the total volume in the United States. Thus, MRI has emerged as both big business and big science. Joyce describes the intimate relationships that have also emerged between the business of scanner development and sales, patient interests, hospital economics, reimbursements, codes for procedures, government policy, and NIH research priorities as a result of the meteoric increase in the use of MRI since its introduction as a medical device in the early 1980s.

With regard to the science, Joyce expands on two NIH priority areas intended to advance understanding of biological mechanisms rather than to develop new imaging techniques that reveal more anatomical evidence for disease: molecular imaging and functional brain imaging (i.e., functional MRI [fMRI]). Joyce relates the future of these techniques to the establishment of reimbursement codes, revealing the translation to medical care from scientific advances in the field. In the case of molecular imaging, one goal is to visualize neurochemical events using nontoxic agents that report the “biostatus” of subcellular processes through selective binding and variation in magnetic susceptibility.

In the case of fMRI, Joyce credits the government-sponsored Human Brain Project, a 14 million dollar effort sponsored by the National Institute of Mental Health (NIMH), among others, for the construction of an archive of brain images intended to facilitate the growth of new applications that merge brain and behavioral sciences. The overall goal is to expand imaging to detect disorders of the mind, including Alzheimer disease, depression, anxiety, developmental delay, and movement disorders. The expansion of brain imaging to evaluate mind events such as cognition, perception, language, and motor control is based on the detection of differences in magnetic susceptibility between the oxy- and deoxyhemoglobin content of blood recruited by neural tissue engaged during a cognitive task. Thus, brain processes that underlie cognitive events are detectable and potentially expand the traditional practice of radiology to practices of biological psychiatry and psychology. These new research directions have the potential to facilitate other “quantum leaps” in imaging, as the relationship among mind, brain, and molecular processes enhances the theoretical basis for physiological processes (2). Thus, imaging techniques graduate from passive reports of biological landscapes to dynamic views of molecular and systems-based mechanisms of mind and behavior.

These and other new developments in imaging related to cardiology, pulmonology, cancer, neurology, skeletal biology, surgical procedures, endocrine biology, rehabilitation, and stroke disorders, for example, depend upon the fragile interface of a constellation of factors related to developments in image acquisition, private enterprise, patient care, government policy, support for research, and creative environments that facilitate innovation. All are comprehensively detailed and cross-referenced in Magnetic appeal under the basic assumption that seeing, even if highly dependent upon computational representations, is the basis for fundamental advances in biological sciences.