Breast cancer gene variants: separating the harmful from the harmless

Breast cancer gene variants: separating the harmful from the harmless

Individuals carrying a mutation in the breast cancer 1, early onset gene (BRCA1) are at increased risk of breast or ovarian cancer and thus are candidates for risk reduction strategies such as oophorectomy and mastectomy. A recurring problem in the clinic is that many detectable changes within the BRCA1 gene produce subtle alterations to the protein that are not easily recognized as either harmful (loss-of-function) alleles or harmless and thus inconsequential polymorphisms. In this issue of the JCI, Chang, Sharan, and colleagues describe a novel system to evaluate human BRCA1 alleles for in vivo function using BACs containing human BRCA1 vectors in mouse cells and embryos (see the related article beginning on page 3160). This strategy should provide new avenues for clinicians to interpret results of genetic testing of BRCA1 variants and for researchers to study the basic molecular mechanisms of BRCA1 function in in vivo model systems.

Methods for assessing the function of human VUS alleles. 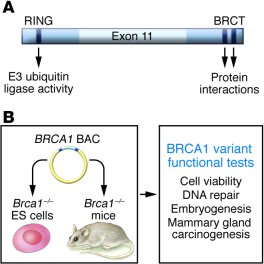 () BRCA1 domain structure, depicting the amino terminal RING domain, exon 11–encoded region, and C-terminal BRCT repeats. Cancer-causing mutations and VUS changes occur in each of these regions. The influence of VUSs that occur in the RING and BRCT domains can be examined for effect on E3 ubiquitin ligase activity and protein interactions, respectively. () The human BAC reconstitution system described by Chang, Sharan, and colleagues in this issue of the , in which human BAC DNA with any mutation can be introduced into mouse ES cells containing a conditional allele of , enabled in vitro investigation of VUSs anywhere within the human gene and their effects on cell viability, DNA repair, embryogenesis, and mammary gland carcinogenesis (). The authors validated their in vitro system with follow-up studies of known neutral and deleterious BRCA1 variants in mice.