Conventional chemotherapeutics may induce immunogenic cancer cell death or stimulate immune effectors via so-called off-target effects. The study by Besch et al. in this issue of the JCI now demonstrates that agents designed to stimulate the innate immune system by activating intracellular pattern recognition receptors can kill cancer cells in a direct, cell-autonomous fashion (see the related article beginning on page 2399). The authors show that ligation of viral RNA sensors, such as RIG-I or MDA-5, by viral RNA mimetics triggers mitochondrial apoptosis in human melanoma cells in an IFN-independent fashion. The data suggest that tumor cell killing and immunostimulation may synergize for optimal anticancer immunochemotherapy. 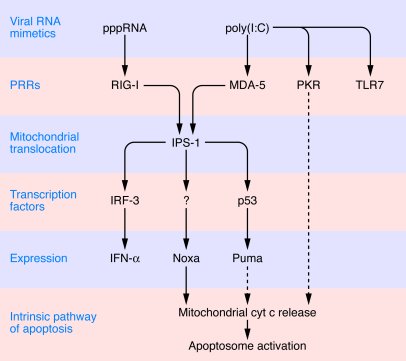 pppRNA activates RIG-I, while poly(I:C) activates MDA-5 and may also interact with PKR and TLR7. RIG-I and MDA-5 then interact with IFN-β promoter stimulator 1 (IPS-1) on the surface of mitochondria. As shown by Besch et al. in their study in this issue of the (), IPS-1 is required for both the induction of IFN-α production (via the activation of the transcription factor IRF-3) and the transactivation of the genes coding for several BH-only proteins (Noxa, Puma). Among these, Noxa is activated in a p53-independent fashion and required for the subsequent mitochondrial outer membrane permeabilization (MOMP); the release of cytochrome (cyt c) from the mitochondrial intermembrane space; and the activation of the apoptosome (a molecular complex composed of cytochrome , apoptotic peptidase–activating factor 1 [Apaf-1], and caspase-9), resulting in apoptosis. Note that IRF-3 is not required for cell death induction by RIG-I and MDA-5 ligands, indicating that the signal transduction cascades resulting in IFN-α production and apoptosis induction bifurcate downstream of IPS-1. Dotted lines indicate hypothetical pathways.