Restraining order for dendritic cells: all quiet on the fetal front

Restraining order for dendritic cells: all quiet on the fetal front

The paradoxical ability to launch effective immunity against pathogens while avoiding the horror autotoxicus of autoimmunity is one of the most remarkable features of the mammalian immune system. This assumes a particular evolutionary significance at the maternal/fetal interface, where avoidance of immune reactivity to the fetus is vital to the propagation of the species itself. Several mechanisms of suppressing maternal immunity against the fetus have been described. The article by Collins et al. in this issue of the JCI describes a novel mechanism of avoiding immune surveillance in which the migratory capacity of dendritic cells at the maternal/fetal interface is restrained (see the related article beginning on page 2062).

Hypothetical model of how non-migration of decidual DCs may regulate immune responses directed against the fetus during normal pregnancy. 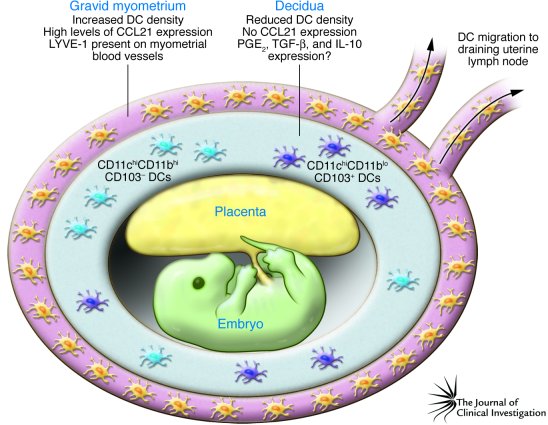 Previous work has shown that lymphatic vessel endothelial receptor–1–positive (LYVE-1+) lymphatic vessels are localized in the myometrium, far away from the maternal/fetal interface upon embryo implantation (). In their study in this issue of the , Collins et al. () demonstrate that the myometrial lymphatic structures were the only structures to express the chemokine CCL21, which is a ligand for CCR7 and drives entry of myometrial DCs into the lymphatic vessels. Furthermore, with uterine growth, DCs in the myometrium increased in tissue density. In contrast, in the decidua there was a reduction in the density of DCs and little or no expression of CCL21. Importantly, the two major DC subsets present in the decidua (CD11chiCD11bhiCD103– and CD11chiCD11bloCD103+) were unable to migrate from the decidua, even after receiving a potent microbial stimulus such as LPS. These experiments provide evidence of decidual DC entrapment and suggest that a structurally intact decidua appeared to impede the chemokine-directed migration of DCs to the lymphatic vessels of the uterus. This DC entrapment could be the method by which an anti-fetal/placental T cell response is prevented, thus fostering immunological acceptance of the fetus by the maternal immune system.